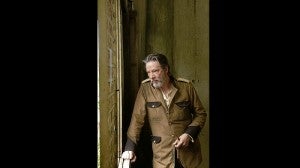 COOPER. Sings, acts and dances in the upcoming “Muppets” movie.

LOS ANGELES—We never thought we’d get to mention “Amigo,” Bohol and…Miss Piggy in one sentence. But, we just did—thanks to Chris Cooper, who stars in both John Sayles’ film (that was shot in Bohol) and “The Muppets,” which is topbilled by our favorite porcine diva and her beau, Kermit.

The Academy and Golden Globe Best Supporting Actor winner for “Adaptation” plays a hardass colonel in John’s drama on the Philippine-American War in 1900, as reflected in a village garrisoned by US troops. The barrio, led by Rafael Dacanay (Joel Torre), is caught in the conflict between the occupying American troops and the Filipino guerrillas.

Chris, one of the finest actors of our time, has been collaborating with John since their first teamup in the acclaimed “Matewan.” He is married to actress Marianne Leone Cooper (she played Joanne Moltisanti in “The Sopranos”), who wrote “Knowing Jesse: A Mother’s Story of Grief, Grace and Everyday Bliss,” her memoir about raising their son who had severe cerebral palsy but was an honor-roll student and a windsurfer and wrote poetry until he died at 17.

“Amigo” opens on Aug. 19 in LA, New York, San Francisco, San Diego, Las Vegas and other key cities. In these excerpts from our e-mail interview, Chris also talks about whether he fell for the long-tressed charms of Miss Piggy:

How much did you know about the Philippine-American War before shooting “Amigo”?

Before working with John on “Amigo,” I knew virtually nothing. Once in Bohol and after getting acquainted with the Filipino actors and crew, I found that they, too, knew very little of our mutual history.

This is the fortune I’ve had over the years in working with John—his stories are objective reports and observations of both sides in conflict, leaving the viewer to ponder on the choices and moral consequences made by their respective nations.

This is your fifth time to work with John Sayles. What fresh insights did you see in him as a filmmaker?

John gave me my first film role in “Matewan,” which is about another little-known piece of American history, concerning the struggles of unionizing labor in the coal mines of West Virginia, circa 1920. He set a standard that I look for in other directors to this day.

Then, as now, John immerses himself in the history, locale and the people of the story he’s telling. We’ve worked together on five films, averaging one every five years, and overall, John adapts to the new surroundings and the people he works with in a most easygoing, respectful and familial manner. He got it right from the start.

What surprised you most about filming in the Philippines?

I’ve done a handful of films overseas with a mix of international cast and crew and I’m constantly amazed to find the similarities in people and how well we can work together as a unit. My greatest surprise and joy was to see several serious relationships and even marriages come to be while “Amigo” was being made. Given the chance, the world can be a lovely place.

How did you stay cool in that wool military costume amid the tropical heat of the Philippines?

The costume didn’t present any problem. Fortunately, I love tropical heat, and it was only a matter of pacing myself between scenes and finding a friendly palm to shade me.

What did you enjoy doing during your breaks from filming?  Did your wife, Marianne, visit you while you were in the Philippines?

During breaks from filming, I did a little sightseeing. I went to the mall for groceries or Bohol’s town square to people-watch. We’d buy a freshly caught tuna from street vendors and grill it that night, along with plenty of rum and beer, and share stories.

I’d go with a group into town for a Filipino meal. I would usually close the night by Skyping my wife, Marianne, in the States. She was busy at the time with her first book, a memoir published by Simon and Schuster called “Knowing Jesse.”

In an earlier interview with the Inquirer, you said you were planning to incorporate some of the design ideas you saw in the Philippines, “like the hip roof,” in your house renovation. Did you get to do that?

My trip to the Philippines greatly influenced my final design for the addition to my house. The drawings and model are finished. I’ve incorporated four hip roofs in the plan and hope to break ground very soon.

Chris Cooper in “The Muppets” movie! What do you play in it?

I play Tex Richman, the villain. I got to sing, dance and act with the Muppets. I had a ball!

Did you find it hard to resist Miss Piggy’s charms?

Miss Piggy was onto Tex the moment she met him. Our encounters with each other were anything but cordial. However, she is a fashionista, and I found it difficult not to stare at her with admiration, even though she scorned me.

Who do you identify with among the Muppets?

Kermit. What a pleasant frog! He just wants to get along and support his friends and make the world a better place. What’s not to like?