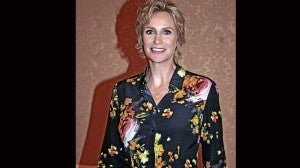 LOS ANGELES—“Darren Criss is going to be so tired by the end of the season, but he’s so good,” Jane Lynch told us in a recent interview even before we could ask her about the Filipino-American actor-singer, who is her costar on “Glee.”

“Darren has numbers in every episode,” said the actress who won an Emmy and a Golden Globe for her portrayal of the acerbic cheerleading-squad coach, Sue Sylvester. “I mean, we’re using Darren’s talent.”

Jane added, “Darren’s character, Blaine, and Kurt (Chris Colfer) broke up. That happened recently, and Blaine is trying to find his own identity at McKinley (High School) without Kurt. Kurt will do the same in New York. I think it’s good for everybody that they’re breaking up. They’re still young, and they have so much to do.”

“Darren is just amazing,” the actress gushed. “Did you see the episode where he sang ‘Teenage Dream’? He played the piano, and it was shot live! It wasn’t prerecorded.”

Jane, blessed with dry humor (and, readers, please note that that is the tone of some of her remarks in this interview), also told us, “We have a lot of fresh meat on ‘Glee’ right now. We’re setting their stories up, so everybody is working less than we did last year and the year before. There are a lot of stories to establish. So, like in a couple of episodes, I’m either not in them or I have just one line or one scene. But, in one episode, I’m all over the place.”

Asked how “Glee” creator Ryan Murphy manages to be on top of other shows, as well, including “American Horror Story” and “The New Normal,” Jane replied with a smile, “He’s got the best boundaries in show business. He’s running three shows right now. I recently saw the premiere of ‘American Horror Story.’ I don’t know how he found time to do that and where in his brain he got it in a very dark place, though, for sure. It was beautiful and scary. It’s going to be a crazy season, so he’s got a lot going on.”

In Disney’s animated film, “Wreck-It Ralph,” which is set in the world of video games, Jane voices the tough-as-nails Sergeant Calhoun. “I was asked to do it because of what I do on ‘Glee,’” she said. “It’s an immediately recognizable voice. I asked the director (Rich Moore), ‘Do you want me to do something different?’ He said no.”

“I am not a gamer,” Jane replied when asked if she played video games. “I did a little Asteroids in college. I was usually drunk when I was doing it. This movie was an education for me. I wasn’t an arcade kid.”

Before she answered what were the first animated films she saw as a kid, Jane volunteered, “I remember the first movie I saw was ‘Alfie’ which was probably inappropriate for a 6-year-old. My mom needed to get out of the house. She dragged me.”

Then, she said, “Probably ‘The Jungle Book’ was one of the first ones. I remember ‘Cinderella’ really blowing me away. Oh, ‘Snow White and the Seven Dwarfs!’”

On what kind of a child she was, Jane admitted, “I wasn’t the most curious or inquisitive kid. I’m much more now. If I could go back and redo my childhood, I would be more inquisitive and curious. I wanted nothing more than to jump in front of the TV and be a part of it like kids do the arcade. After the TV went off, I thought, ‘Where do they all go?’ I wanted to be in Mary Tyler Moore’s apartment and ‘The Brady Bunch’ house. I wanted to live in the house of ‘My Three Sons.’ I live not far from that house now. It’s always a joy to go down that street.”

“I was very much lost in my imagination,” she continued. “I wasn’t a great student, but I was a nice kid. I was under the radar in the sense that I didn’t get made fun of. I was kind of popular and liked. I started doing more plays and singing in high school. I came out of the closet that way.”

Back to “Glee” and her wicked yet popular character, Jane explained, “Why I love doing the show is because I go in and out. Sometimes, I’m the voice of supreme reason; sometimes, deep empathy, and sometimes, viciousness and cruelty. There’s nothing half and half about Sue. Although this season, and I love this, I’m actually giving Will (Schuester, played by Matthew Morrison) good advice.

“Sue is one of those people who felt all her life that she had to do battle. She had to protect her tender heart, her sister, and then Becky. She’s evolving. She now has a baby of her own. It softened her a bit.”

Prodded to talk about how fans react to her in person, Jane answered again with humor: “The ones who usually come up to me are 14 and 15 year olds. You can’t tell them to go buzz off. You have to pay attention to them. I know this is a big mind-blower for them, because I know what it was like when I watched TV at that age.”

“No one ever says, ‘I thought you were so mean.’ No one is afraid of me. That’s the key to the charm, if you will, of Sue Sylvester. You’re really not afraid of her. She’s not Hannibal Lecter. She’s got no teeth. Her bark is bigger than her bite.”

How Trump’s impeachment differs from a criminal trial

Anti-Trump protests have shrunk. What’s it mean for 2020?