Filmmaker Marilou Diaz-Abaya, 57, to be laid to rest Saturday 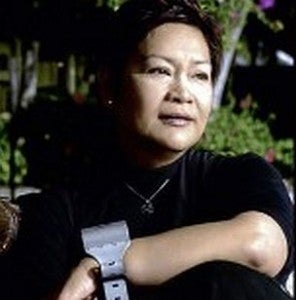 MANILA, Philippines—”She was my source of comfort. She believed in me more than I believed in myself,” said actress Ina Feleo during her eulogy for Marilou Diaz-Abaya, who will be laid to rest Saturday morning (Oct. 13) at the Loyola Memorial Park in Parañaque City.

The award-winning director and writer passed away on Oct. 8 after a five-year battle with cancer. She was 57.

A Necrological Mass was celebrated on Friday night at the Gonzaga Building chapel of the Ateneo de Manila University in Quezon City, where Abaya’s remains has been lying at since Monday night.

Feleo plays the lead character in Abaya’s last movie, “Ikaw Ang Pag-Ibig,” which was released in 2011.

“When she introduced me to people, grabe siya kung magyabang. She was so proud of me, ako na lang ang nahihiya,” shared Feleo, who is the daughter of Abaya’s friend and contemporary, Laurice Guillen, with the late actor Johnny Delgado. “She fought for me to portray the lead in her last movie.”

In her eulogy, Guillen described Abaya as a “generous teacher, dear friend and sister.” She shared that Abaya and Delgado were stricken with cancer only months of each other. Delgado passed away on Nov. 19, 2009.

“She was a regular visitor of Johnny. She was the only member of his support group,” Guillen shared.  “Marilou went the way she chose to go–the way of Jesus… God speed, be our advocate in heaven.”

Among those who gave their eulogies were journalist-sociologist Randy David, actor Cesar Montano and community activist and publisher Mona Lisa Yuchengco.  The Necrological rites preceded a Mass at 6 p.m. that was celebrated by Bishop Pablo David.

Abaya’s remains will be transferred to Church of Jesus, also inside the Ateneo compound, at 6a.m. Saturday. A Mass will be celebrated by Archbishop Leonardo Legaspi at 8a.m. Her cortege will then leave for Paranaque City at 10 a.m.