What it means to be ‘Flip’ 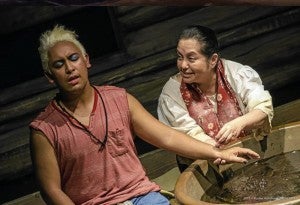 LOS ANGELES—How would you react if you were called a Flip?

This we asked director Jon Lawrence Rivera and actress Becca Godinez recently after watching “Flipzoids,” Ralph B. Peña’s play set in 1985 on the immigrant experience and its various aspects—isolation, connection and assimilation.

According to Wikipedia: “Flip is a term used colloquially particularly by Filipino-American youth to refer to those of Filipino descent. According to the late journalist and activist Alex de Leon Fabros, Sr., the term was first used among Filipinos sometime after his immigration to the United States in 1929. While Flip is usually used inoffensively, the folk etymology of the term is that it is an acronym for ‘f***ing little island people’ which was allegedly coined by American soldiers during World War II… A more plausible etymology of the term is that it is derived from the word Filipino.”

In “Flipzoids,” Maxwel S. Corpuz plays Redford, a young Fil-Am with blonde hair and identity issues. He utters what the offensive acronym stands for in the play, which runs until Oct. 28 at the Los Angeles Theater Center in downtown LA.

Redford stumbles on an old Filipina, Aying—portrayed by Becca in her first play after 31 years—on a deserted Southern California beach. Aying gazes longingly at the ocean that separates 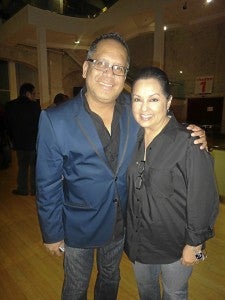 her from her hometown in Pagudpud, Ilocos Norte.

It’s a triumphant return to  stage acting for Becca, who inhabits Aying with natural ease, as she shifts from teasing Redford (“Juk [Joke] only!”) to movingly expressing her homesickness with lines like, “When I touch the water, it is almost like touching my home. That is why I like to come here.”

The aging woman is an embarrassment to her daughter, Vangie (Ellen D. Williams), a nurse immigrant so determined to assimilate into mainstream America that she’s constantly listening to a “how-to” cassette tape on her Dictaphone to improve her English vocabulary and pronunciation. Vangie cringes when her mother breaks into rituals. She could not relate to Aying’s desire to go back to Pagudpud.

This staging of “Flipzoids,” with PAE Live!’s Ted Benito as executive producer, is the latest project of Jon, fresh from successfully directing Euripides’ “Helen” at the Getty Villa. More information about “Flipzoids” is available at www.thelatc.org.

Below are excerpts from our e-mail interview with Jon and Becca:

Have you or someone you know been called a Flip? 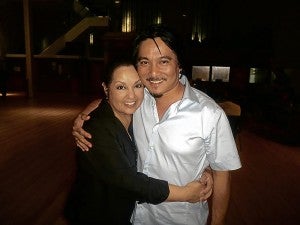 BECCA with Alan del Rosario, who designed her authentic baro’t saya for the play. RUBEN Nepales

Jon Lawrence Rivera (J): I think I’ve heard it used once or twice before. But I never thought it meant what it meant the way Redford said it—“f***ing little island people.” I thought it was simply a shorter, hipper way of saying Filipino. Yeah, I’m a Flip. So it never bothered me. I mean, they don’t refer to any other group from an island nation as “Flips,” right?

Becca Godinez (B): When I lived here in the US as a student, a music professor took us, his college singing group of which I was a member, to an aircraft carrier where we were invited to sing.  I performed a solo number with the band. After the performance, we were invited to eat with the head officers of the carrier. One officer was asked to walk with me through the smorgasbord line to pick out my meal. He walked ahead of me. At one point, I noticed that he was irritated and as he left, he said, “That Flip!” I was surprised and looked closer to see that the server was, in fact, Filipino.

I held back and when the officer was gone, I began speaking to the server in Tagalog and thanked him for the food and for his service. What a big smile I received! I walked back to my table where the admiral of the ship was also seated. He asked, “Who were you talking to?” In a very clear voice and looking only at the admiral, I said, “To the server, sir. I was speaking in Tagalog. You see, I am a Flip.”  Although I did not look at the minor officer directly in the eye, I noticed that his cheeks turned three shades of red. Later, out of earshot from everyone else, he approached me and apologized.

What was your gut reaction the first time you read the “Flipzoids” script?

J: I read “Flipzoids” for the first time over 10 years ago. I was in a very different place then in my life. My career in directing was just taking off and the play spoke to me through Vangie’s character: “Try to melt in. Be part of the whole.” But when I picked it up again after Ted asked me to do it, I connected to Aying’s plight—the need to “connect,” to “remember” the past. Maybe it’s because I am older and age does not distance us from our past; it makes the connection stronger.

B: I kept thinking, “Thank you, Ted Benito, for giving me this great opportunity.” Then, as I read the script further, I thought, “Oh my gosh, I know this character!” I couldn’t put the script down. My immediate thought was, “I want to do this play! I want to be Aying!” That surprised me because I had thought that I would never return to the theater. However, Ralph wove such a tapestry within his words and storytelling that it compelled me to want to keep reading and, further, consider auditioning for the part.

How does “Flipzoids” resonate with you on a personal level?

J: “Flipzoids” is my family’s story. My nieces and nephews who grew up here in America are like Redford. They really don’t have a connection to the Philippines. Yes, they hear the stories 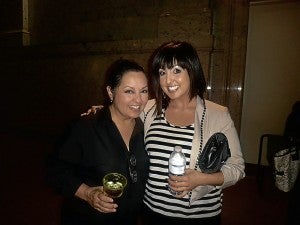 and revel in them. But not until we brought everyone home about three years ago did they get a real picture of what we talk about. My nieces asked: “You mean you were really born here?” It wasn’t real to them until they had been there.

B: I know each one of the characters in this play through people I have met in the US. Aying, my character, is especially dear to me because I share many of her longings about home. Although I love where I live now, my mind meanders through memories of younger times in Cebu, Mindanao and Manila. It is hard to let go of traditions that comfort the soul. Christmas is an especially difficult time for me. When the season comes, I immediately think of Manila with the lights, carols and decorations that are displayed as early as November! There is nothing like it anywhere.

Jon, what do you think is the appeal of “Flipzoids” to Filipinos and non-Filipinos?

Becca, which part of the play gets to you or moves you with every performance?

B: Two scenes get to me all the time. The first is when Aying speaks about what she did before she got on a plane bound for America. She walked around different parts of her house. Then she stood in the middle of her kitchen and smelled her mother’s cooking. It is hard not to cry or to separate that from my reality. In my life, my mother’s wonderful cooking meant family get-togethers and special occasions to celebrate with friends. To me, the scents were reassuring reminders of the joy, safety and comfort of home.

The second is Aying’s last act, where she symbolically erases evidence of her existence. I cannot go through the scene without becoming emotional at the reality of what some people must go through. Many in their old age are discarded and forgotten; made to leave their homes or to live as vagabonds in their children’s homes—sometimes treated as a mere nuisance or obligation. When the better choice is not to exist at all so that one is not a burden to anyone else, that is extremely sad.