Let’s hear the news without the ‘noise’ 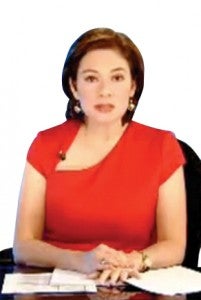 I don’t know about you, but I’m less than thrilled with the “service” being provided by many of our TV newscasts, which have compromised their obligation to objectively report on the day’s most significant events. Instead, they have opted to focus on crimes, accidents, gossip, scandal and other more “colorful” and melodramatic stuff.

Given local viewers’ partiality to teleseryes and show biz “news,” these attention-grabbing ploys have proven to be successful. But, do they constitute significant news reportage? And, if not, where should viewers go to find real news, not “noise,” on local TV?

These days, I sometimes find myself catching the 6 p.m. newscast on Solar TV, anchored by Pia Hontiveros, if I want to get the facts, and nothing else. Most of the time, the newscast excludes stories about insignificant crimes, accidents and show biz fluff, puff, bother and blather.

In addition, its reporting style is markedly more low-key than the overly loud and “dramatic” style favored by other newscasts, which often make a relatively minor altercation look and sound like the start of World War III!

Similarly striking is Pia’s refusal to “punch up” her delivery, preferring to let the stated facts speak for themselves, with no embellishments and other “colorful” and “dramatic” distractions. And, absolutely no “opinionating,” please.

Viewers who prefer this treatment are grateful to Pia, because her temperate, judicious and professional approach enables them to understand the day’s news in the right context, and makes it easier for them to analyze and appreciate its significance to and impact on their lives. It’s the right of televiewers to expect this kind of service, because it honors their intelligence and independence.

Of course, some TV news people will dismiss this “colorless” approach as too boring and viewer-unfriendly—especially in the Philippine context, where everything has to be punched up and made entertaining and empathetic to the max!

They will point out that the most popular newscasts on the tube are precisely the in-your-face, shout-out-loud productions, so that means that they’re the ones that “connect” with local viewers where they live and breathe.

We hope, however, that more objective news reports like Hontiveros’ program will eventually gain a bigger following of viewers who want their TV news clear-cut and unadorned.

After all, these are the same people who buy broadsheets that don’t jazz up the news and respect their right to analyze and thoughtfully make up their own minds. Why should their expectations and requirements of the TV news be any different?

Yes, TV is more personal in its approach and impact, so a more emotional bond is achieved between its images and the viewing public. But, this should not be exploited to unintentionally or intentionally subvert the supreme importance of objectivity and reliability in its reports.

Let’s leave the drama to the teleseryes and the opinionating to the radio-TV commentators, and make verifiable facts and significant context our TV newscasts’ reasons for being, as they were originally meant to be.