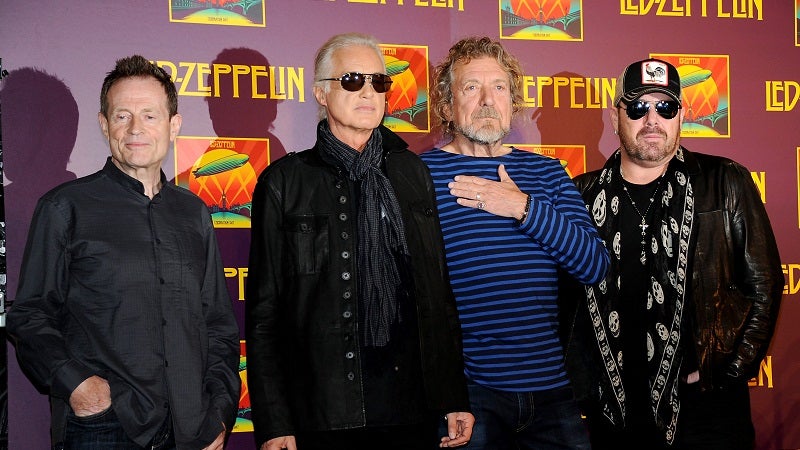 ‘STAIRWAY (BACK) TO 2007’. Led Zeppelin, from left, bassist/keyboardist John Paul Jones, guitarist Jimmy Page, singer Robert Plant, and drummer Jason Bonham participate in a press conference ahead of the worldwide theatrical release of “Celebration Day”, a concert film of their 2007 London O2 arena reunion show, at the Museum of Modern Art on Tuesday, October 9, 2012 in New York. Photo by Evan Agostini/Invision/AP

NEW YORK— Led Zeppelin will not be reuniting any time soon.

That message came through loud and clear Tuesday with sarcasm, stoic silence, and even the occasional barb at reporters that dared to ask. Just the mere mention of the topic set lead singer Robert Plant off at their news conference for the bands upcoming concert film, “Celebration Day.”

But at the film’s premiere later in the evening, guitarist Jimmy Page set the record straight, sort of, about a potential reunion.

“I think it’s disappointing for people when the answer is no,” Page said. But he later added: “That’s what it is now.” 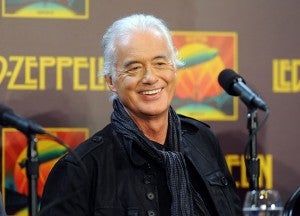 JIMMY PAGE at the press conference. Photo by Evan Agostini/Invision/AP

“Once the idea was proposed, ‘Would we do the concert?’ It had to be Jason,” Page said.

Since the death of Bonham in 1980, the band has only played a handful of gigs, with the 2007 tribute concert being the last time. The group enlisted the younger Bonham, a successful drummer in his own right, to play with the band.

On the red carpet, Bonham said he understands why the fans want something more from the band, but feels there’s good reason to put it to rest.

“I think it’s probably frustrating to the public when they see how good it is, and they go, ‘why won’t you do anymore?’ They don’t get it,” Bonham said. “But you know what, there’s a time, and for me it’s when John Bonham was in Led Zeppelin.”

Jones, the band’s bassist, eloquently said all the band’s energy went into that performance.

“We focused on the show and that was it. Fortunately it was on film,” Jones said.

Page was conscious of Led Zeppelin’s uninspired performance at the Atlantic Records 40th Anniversary concert in 1988. So the band rehearsed for about six weeks prior to the London show.

“You have to understand, any other group would be a doing a warm-up gig, and then they would have like two or three concerts in a row. We could have done more than one, with the demand, but we only had one shot and we had to be super-duper confident on it, and it went well,” Page said.

During a news conference earlier in the day, the band first became uncomfortable with a question about “anticipating something bigger for the band.”

“We’ve been thinking about all sorts of things, and then we can’t remember what we were thinking about,” singer Plant said testily. He then referred to this reporter by the pejorative term “schmuck.”

As the questions mounted about anything to do with their future, the band responded with silence.

At one point, Page mentioned that the reunion concert was five years ago and that if there was a chance they were reuniting, people would have heard.

“Celebration Day” will be released worldwide on Oct. 17 on 1,500 screens before its release on DVD Nov. 19.