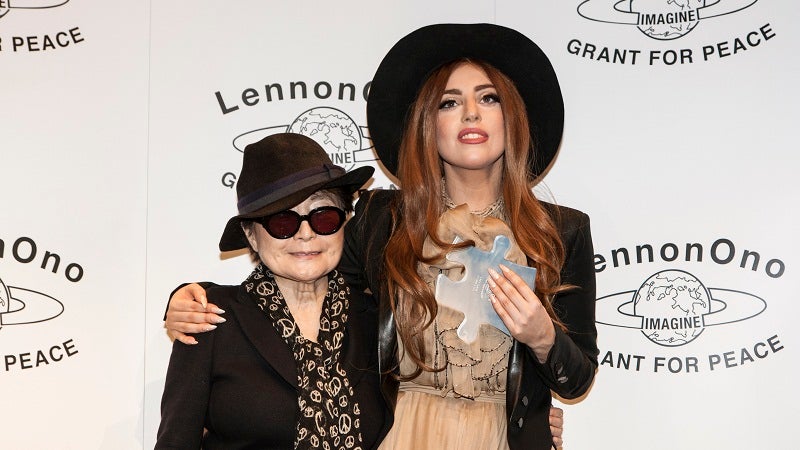 Performer Lady Gaga, right, poses for a photograph with Yoko Ono after receiving a Lennon Ono Grant For Peace award in Reykjavik, Tuesday, October 9, 2012. Lady Gaga was presented the award for her social activism. AP/Brynjar Gauti

REYKJAVIK—Lady Gaga said on Tuesday she would donate a peace prize given to her by artist and activist Yoko Ono to Elton John’s Aids charity.

“I will be donating this grant to the Elton John Aids Foundation and I will be working closely with them to ensure that the money goes specifically to those orphaned and disadvantaged youth in America born with HIV or AIDS,” she said in her acceptance speech.

The LennonOno Grant For Peace is a biennial award handed out by Yoko Ono, the widow of former Beatles star John Lennon.

Ono told AFP that she wanted to honor Gaga for her work campaigning for gay rights.

Gaga is “powerful” and “it’s great that she is using her power to do other things than just singing,” she said.

The American singer shared this year’s prize with Russian punk band Pussy Riot, the late writer Christopher Hitchens, Rachel Corrie, an activist who was killed when protesting in Gaza, and author John Perkins.

The award was established in 2002 in memory of John Lennon’s activism and is given out every two years to people working for peace. The size of the award has never been disclosed.

Read Next
Marilou Diaz-Abaya in her last hours high on a ‘starry, starry night…’
EDITORS' PICK
Smart brings KCON:TACT especially 4U to subscribers from June 19 to 27
IATF recommends to Duterte face shield use in all enclosed areas
Red, yellow alerts in Luzon grid possible in coming weeks — DOE
Smart celebrates all kinds of ‘#SimplyLove’ for Pride Month
Leo Martinez pleads for senior citizens to be allowed to go out
He called bank: SJ Belangel aimed for backboard on game-winner vs Korea
MOST READ
Pacquiao ‘good choice’ as PDP-Laban standard bearer for 2022 – Koko Pimentel
Notes for next president: Huge debt, unemployment, hunger
Duterte says face shields for hospital use only — Sotto
Lakas-CMD to solidify alliance with Inday Sara’s HNP – Romualdez
Don't miss out on the latest news and information.