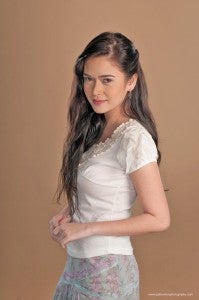 Actress Bela Padilla said the best thing about landing the lead role in “Magdalena,” the latest GMA 7 afternoon drama series, was that she could help empower women.

Bela is a member of Called to Rescue, an organization that helps women and children victims of human trafficking. “The group conducts rescue operations,” she explained. “Sadly, it’s not advisable for celebrities to participate in the operations. That’s why I was so excited when I learned I was finally doing the TV series. What better way to promote the group than this? Magdalena, who is forced to work as an escort girl, is a victim of human trafficking, too.”

The actress added: “I love all the roles I play on TV, but some of them have themes that are so unrealistic, they don’t happen in real life. On the other hand, ‘Magdalena’ is shockingly realistic. Even I learn so much from it. I’m glad I can help empower women, open their eyes.”

Based on the Pilipino Komiks series “Kukulayan Ko ang Langit,” the series is about a provincial lass, Magdalena (Bela), whose marriage to Baron (Ryan Eigenmann), a rich businessman from Manila, is arranged by her mother, Luding (Irma Adlawan). But instead of marrying her, Baron abuses Magdalena and forces her to work as an escort girl.

“No woman should be sold, bought, or taken home if she doesn’t want to,” Bela stressed.

“This character is complex. She’s a vida-contravida,” Bela added. “On the first week of the shoot, all of my scenes required crying. Magdalena is so naive. I’m like her in real life—too trusting. I think I’d be more effective playing the vengeful Magdalena because I’d feel more detached.”

As to how much skin she would bare in the series, Bela said: “We’re still bound by the standards of television. I know my director (Gina Alajar) will take good care of me. She briefed my mother about what I would be doing.”