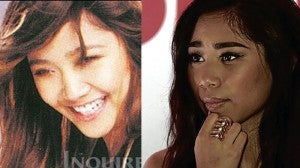 CHARICE (left) and Jessica should step in and hold their respective loyalists at bay.

How sad to read and hear that supporters of Charice on the one hand and Jessica Sanchez on the other are snittily criticizing each other’s idol over their so-called “Pinoy-hood” cred. Jessica and Charice are the two top young female entertainers of Filipino descent making waves internationally, so you would think that their supporters would focus on that commonality, instead of what sets each of them apart.

Come to think of it, that’s par for the local show biz’s “sabong” course, because we just love to pit similarly situated rising stars against each other, the better to get their respective cadres of fans heated up, and feistily and sometimes even nastily, ready to “fight” for their respective bets’ success—all the way!

It doesn’t matter if the stars themselves are good friends in real life, as in the case of Nora Aunor and Vilma Santos. It’s their overly-zealous fans who shout invectives at each other and denigrate the other group’s fave.

Jessica is being criticized by some of her rival’s adherents for not being “Filipino enough,” having been brought up American by her Filipino mother and Mexican father.

On the other hand, Charice (who’s “more Filipino,” since both of her parents are Pinoy), is criticized for having become “Americanized,” blonde hair and all. When push comes to shove, both sides are vulnerable when “nationalism,” or the pop perception of such, is the current bone of gnawing contention!

We hope the young stars themselves will step in and hold their respective loyalists at bay, before the surly situation further deteriorates. Truth to tell, it’s unlikely that neither young luminary feels that strongly about the “issue.”

Basically, they’re just two young talents who are doing their best to take full advantage of the golden opportunity that’s been given to them to make it in the music biz, both locally and internationally.

It’s some of their more perfervid supporters who are fanning the flames of acrimonious competitiveness with such bulldog tenacity.

But, if the stars involved don’t calm things down, they could end up as the losers in this cacophonous “debate,” so it’s time for them to act. After all, it’s their careers’ steady progress that’s at stake—and there really is room for two or even more young entertainers of “Pinoy derivation” to make it in the big-deal music scene.

For instance, you don’t hear Bruno Mars’ own fan base joining in the shout fest, do you?

Of course, Charice and Jessica are both female, so the rivalry is more focused and palpable in their case. But, when everything is said and done, it’s the quality of their performances and the breaks that are, steadily or only occasionally, coming their way that will determine the “winner” in their so-called competition and rivalry.

And who would that be? Naturally, their respective fans will claim that their bet is “it,” but it would be really great if both of them do well in their careers. Everybody wins (us included)!