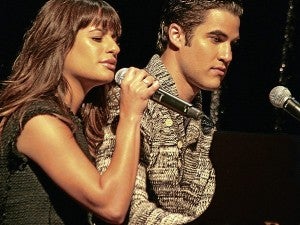 LOS ANGELES—Lea Michele and Darren Criss sounded and looked good together singing Bob Dylan’s “Make You Feel My Love” one recent morning at the “Glee” auditorium on stage 16 of the Paramount Studios lot.

With Darren playing the piano as they sang, the duo made the visiting journalists forget that “Glee” revolves not just on their characters—between them are Kurt Hummel (Chris Colfer), Finn Hudson (Cory Monteith) and a new guy, Brody Weston (Dean Geyer).

We’ll feature the second batch in our column this Sunday. (As we write this, Nolan Gerard Funk was announced as the newest “Glee” cast member; he will play the new frontman of the Warblers.)

Below are excerpts from the first batch and show creator talking about what to expect in coming “Glee” episodes:

Blaine Anderson gets to be in Ohio and New York, so I get to see both sides. I’m enjoying that Blaine, like Tina, has a new sense of identity. He’s missing his boyfriend so he’s trying to preoccupy himself doing things to keep his mind off it, for better or for worse. Blaine is going crazy with a bunch of different clubs. He runs for president. He’s the overachiever that we have come to know and love. 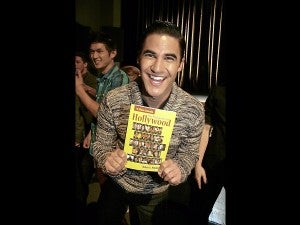 CRISS with a copy of columnist Ruben V. Nepales’ book, “My Filipino Connection: The Philippines in Hollywood,” where the Fil-Am talent is one of the featured subjects.

I’m in the unique position of being able to go back and forth between the new kids and the “old fart” kids. I had a moment that was very touching. I finished my scene very early and I was on the way out of the building. The four new kids had a scene. It was Jake (Jacob Artist), Blake (Jenner), Becca (Tobin) and Melissa (Benoist). I was looking at this like an outsider. I was like, wow, this is their time—they’re realizing their dreams. I remember when it happened to me. It was really nice.

Darren had never done his own creative music on the show … We had never really sat him behind the piano until episode 4, which is my favorite episode in the history of the show. People who have seen it believe that it’s the best episode we have ever done. Darren has a two-and-a-half minute number where he sits at the piano and does an acoustic version of “Teenage Dream.”

In this episode, which is called “The Break Up,” we took pop songs and really made them musicals … used them to convey emotions in a way that you couldn’t say with dialogue.

We’ll be doing some of the songs that Darren and Lea have been particularly funny about in our late night e-mails and texts … if something moves you as an artist, where you want to sing that song, yeah, we do it. Lea, what is the song you wanted?

Lea: I want to do “Wide Awake” and “Skyscraper.”

Ryan: Matt Morrison has that conundrum like, okay, I just won the National Championship; what am I going to do next? So he goes to do a new dream. There’s somebody who runs the joint a little bit. Around episodes 8 and 9 Matt comes back and it’s very much like “Star Wars” where he’s fighting to get the soul of the club back.

I’ve always wanted to do one about the big brother, so we are definitely going to do a lot of scenes with Jacob Artist and Mark Salling where they help each other. It’s a very beautiful brotherly story that we launch on episode 4.

We’re writing an episode where we’re doing the “Gangnam Style,” the big hit. I’m trying to figure out how I am going to mash up with that and make it our own.

The funny story about Dean Geyer was, I had not seen him in “Terra Nova.” He walked into the room and everybody sat up, particularly the women who thought he had great star and sex appeal. Then we narrowed down the list to three actors. We had Lea do a screen test with all of them and…

Lea: Are you going to tell the story right now?

Yes. The other two were very good. Then Dean and Lea are doing the screen test. At the end, Dean walks off camera and Lea walks toward the lens and did the OMG face.

As you get into episodes 4, 5, 6 and 7, the new people reveal things and issues that are very singular to them. I’ll give you one example. Blake Jenner’s character is a really great athlete but he is having trouble in his class work. What we reveal is that he has dyslexia, which is something we’ve never written about. So many kids across the world will relate to his struggle to have victory over dyslexia.

Lea: It always really felt to me that Rachel Berry belongs to New York. I’m enjoying working with Kate (Hudson) and on all of our new sets, which are so gorgeous. Going back and forth between New York and Ohio has turned out seamless.

Matthew: Will Schuester has been trying to get this ragtag group of kids win the national championship. Now that he’s got that, he’s trying to figure out for himself what he really wants with his life and trying to inspire a whole new crop of kids.

Jenna: Tina Cohen-Chang is in her senior year. She’s found this confidence. She didn’t have that last year, especially after Rachel told her, “You’re going to be one of the lead vocalists this year. You definitely have to step up.” But I think she takes it a little bit far sometimes. She’s definitely bossy. She even has a freshman assistant.

Blake: (He comes on episode 5.) I play Ryder, an athletic guy. He’s never sang in his life. He falls into the Glee Club by accident. You don’t know his vulnerabilities at first but, as time goes on, people will definitely learn of the skeletons in his closet and what he’s hiding as a person.

Jacob: I play Jake Puckerman, who is Noah Puckerman’s younger half brother. He’s a bit of a lone wolf. He’s an outcast and he has his guard up. We see how that affects his journey with the Glee Club.