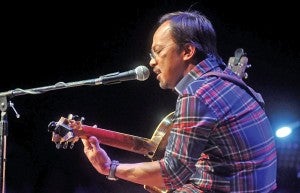 Singer-songwriter Noel Cabangon is usually best heard in a small, intimate venue where the audience can easily immerse in the crisp sound of his guitar and his soul-stirring voice. But his concert, titled “Tuloy ang Byahe” at the Music Museum last Friday, showed that his music lends itself beautifully to more elaborate arrangements as well.

Cabangon’s emotionally-charged composition, “Kanlungan,” for instance, swelled and ebbed to a multilayered orchestration of strings, flute and piano, intensifying the feeling of longing the song evokes.

The show’s setting was of a simple, fun street jam session with friends. Accompanying himself on acoustic guitar, the 48-year-old artist sat on a bench for the most part of the concert, strumming away and pouring his heart out.

As he interpreted various OPM classics such as “Kahit Na,” “Handog,” “Anak,”  “Tuwing Umuulan at Kapiling Ka,” “Ikaw Lang ang Aking Mahal” and his own “Kayod Kabayo, Kayod Barya,” Cabangon reminded us that, with genuine skill and musicality, a performer can do away with fancy sets or stage gimmicks that seem to be the norm these days.

With balladeer Christian Bautista on vocals, Cabangon played Jose Mari Chan’s “Beautiful Girl,” causing the ladies to swoon. He brought the house down with Gloc-9 in “Manila,” which he followed up with an electrifying duel with Bamboo Mañalac on “Tatsulok.”

Written by Rom Dongeto—Cabangon’s bandmate in Buklod—the socio-political song was revived by the former Rivermaya front man in 2007.

Ogie Alcasid joined Cabangon onstage and drew laughs from the crowd with their playful banter. Both officers of the Organisasyon ng Pilipinong Mang-aawit, the duo championed Filipino pride and patriotism with original compositions “Ako’y Isang Mabuting Pilipino,” “Bagong Pilipinas” and “Ang Galing ng Pinoy”— a fitting moment for a gig graced by no less than President Aquino.

For more than two hours, Cabangon took us on a musical journey. And what a lovely ride it was. Allan Policarpio, contributor

The show was a celebration of Aiza Seguerra’s 25th year in show biz that saw her morphing from a precocious TV-movie child star into an aspiring folk-rock singer-songwriter. An all-star lineup of guest performers assured a crowd of about 7,000 that the concert won’t drag even for a bit.

Aiza’s opening repertoire ran from her teenage favorites (The Eraserheads’ “Alapaap,” The Corrs’ “Runaway,” Goo Goo Dolls’ “Iris”), to the acoustic pop hits she recorded (“Pakisabi Na Lang,” “Akala Mo,” “Para Lang Sa ’Yo”)—all of which taught her to absorb lyrical sensitivity and to accompany herself on guitar.

But it was her cover of Simon and Garfunkel’s “Bridge Over Troubled Water” that somehow revealed the pain and suffering she went through as a person dealing with sexuality issues and relationship woes.

There was a hint of nervousness and a sense of freedom when she and rumored girlfriend Krizza Neri wove a counterpoint version of “If I Could” and “Wind Beneath My Wings.”

She broke into tears while introducing an influential mentor, Vic Sotto, before they sang a duet of Kenny Rankin’s “What Matters Most.”

Aiza could further evolve into a top musician if she would keep writing her own songs.

At her next big concert, perhaps she won’t need the “ASAP” Sessionistas (who messed around with a FrancisM medley and fumbled along the way), and the ABS-CBN Philharmonic Orchestra (which was really unnecessary in most numbers).  Pocholo Concepcion 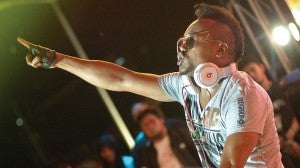 We sneaked out near the end of Aiza Seguerra’s concert and endured heavy traffic to catch apl.de.ap at this year’s San Miguel Beer kick-off party to celebrate Oktoberfest.

The Filipino-American member of The Black Eyed Peas (BEP) basked in the festive vibe of the event, which drew a crowd of nearly 20,000—many of whom trooped to the open-air lot with their buddies.

The first half of apl’s set focused on his DJ skills. He worked up the audience with rousing mixes highlighted by his own song, “Bebot.”

He went on to jam with Pinoy rap-metal band Slapshock. The odd pairing nevertheless produced wonderful results, as apl and Slapshock’s Jamir Garcia shared spirited vocals on “The Apl Song” and “Where Is the Love,” among other BEP classics.

Curiously, rain poured before and after apl went onstage. But most of the crowd stayed on, fortified by all kinds of beer. 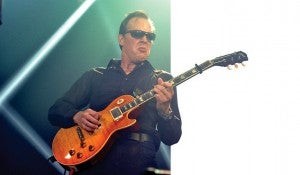 This one happened three days earlier than the simultaneous gigs, but it deserves mention because Joe Bonamassa is said to be the top blues rock musician in the contemporary scene. Only a few hundred blues fans showed up, but we sure felt fortunate to have been there—if only to hear the American guitarist’s exhilarating licks.

If the blues is about heartbreak and desperation, Bonamassa expressed it with technical excellence—his solos clean, fluid and flawless. There were snatches of Led Zeppelin and Santana riffs on “Who’s Been Talkin’?” and “Midnight Blues,” respectively, but they induced more excitement rather than the feeling of being ripped off with imitation issues.

After being blown away with 11 white-hot blues numbers, the serious fan is advised to look into Bonamassa’s discography to find more proof of his greatness. Pocholo Concepcion