This David sure loves what he’s doing 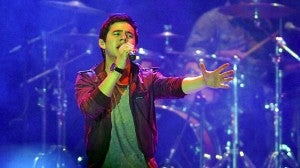 David Archuleta proves he could hold his own as a young pop star. Photo by Jim Guiao Punzalan

It was too good to be true, but David Archuleta held captive an audience of wildly cheering fans, as well as a few skeptics, at his concert Monday night at the Araneta Coliseum.

Three years have passed since the boy from Utah placed second in “American Idol” season 7, and although he was quite impressive the first time he performed here in May 2009, it was a back-to-back concert with the guy who beat him in “Idol,” the other David (Cook).

And even if he has turned 20, Archuleta, in our view, still lacked the depth and experience to pull off a solo show in a venue as imposing as the Big Dome. Well, the audience’s number didn’t reach capacity levels, but the singer-songwriter proved he could hold his own as a young pop star.

His energy flowed like bubbles from a champagne bottle right from the opening song, “Stomping the Roses,” whose light pop-rock beat he magnified through expansive body movements.

He would do these gesticulations throughout the show, along with peculiar, happy-as-a-drunk dance steps that could tease any punk rocker in the crowd. It was quite a sight—a nerdy, clean-cut kid bouncing up and down like he has just turned on to the Sex Pistols.

Almost every tune that followed meant the moon and the stars to the thousands of love-struck teeners in the crowd. But those who have never heard of Archuleta’s albums couldn’t afford to ignore his earnest vocals in, for instance, “A Little Too Not Over You,” even if the lyrics seem too cutesy for someone in self-denial over a romantic breakup.

But that’s exactly the sort of material that suited Archuleta fine and he didn’t look baduy at all as he poured out bucketfuls of emotion in many of the bittersweet love songs.

But hey, this kid could rock, too, and this he demonstrated in a cover of Tears For Fears’ “Everybody Wants To Rule the World,” though the band’s arrangement had a pop ballad intro.

His version of his friend Daniel Bedingfield’s “Gotta Get Through This” was very interesting to those who didn’t know the song, which Archuleta mashed up with snippets of The Police’s “Message in a Bottle.” 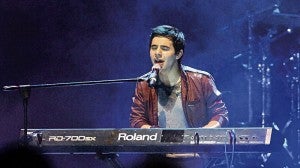 Archuleta looked like he really loves what he’s doing and it was felt in “Touch My Hand,” from his 2008 self-titled debut album, in which he sang, “Can’t let the music stop … ”

Surely he knows that variety is the spice of life—a fact that the audience witnessed when he sat down and played the keyboards for another cover, Vanessa Carlton’s “A Thousand Miles.” Prefacing the song with a spiel, “This reminds me of my mom,” Archuleta proceeded to tackle its cascading piano riffs with a smile on his face.

Other wonderful covers came by way of Ben E. King’s “Stand By Me” and Bryan Adams’ “Heaven”—the latter, which served as the show’s encore, signifying what Archuleta holds dear: “Love is all that I need…”

It took one more number, actually his first recorded single, “Crush,” to bring the show to an end, but the fans couldn’t get enough and kept the song’s chorus to heart: “This crush ain’t going away-ay-ay…”

As a whole the concert was not without its drawbacks: too much smoke effects and over-reliance on backlighting that impeded good camera shots for Facebook.

But those observations were too trivial and we realized that a short comment from a middle-aged, poker-faced member of the audience succinctly captured what everyone felt: “Magaling. Nakuha ng tao ang energy ni Archuleta.”