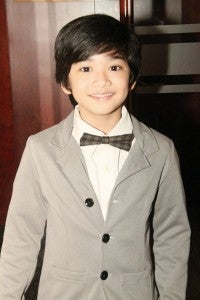 This boy’s older costars dote on him.

Although he’s been working since, the child star, now 11, says that he can still enjoy the things that “regular” kids do.

“I bond with my friends and younger siblings (Zildjan and Zymec) on my days off. We go out and play, or go bike riding around the neighborhood,” Zaijan said at a recent press con for his primetime show, “Lorenzo’s Time,” which ends on October 5.

“We also tease each other and get into arguments,” he confessed. “But after a little while, we start playing again as if nothing happened!”

Young as he is, Zaijan manages to juggle his career and education. He tapes “Lorenzo” on Monday, Wednesday and Friday, and studies every Tuesday, Thursday and Saturday. He is currently enrolled in Angelicum College’s home study program.

Zaijan became a household name after topbilling the drama series “May Bukas Pa.” His role as a miracle boy named Santino won for him several awards.

On the set of “Lorenzo,” Zaijan has impressed his costars Gina Pareño and Carmina Villaroel.

“It’s hard to believe that an 11-year-old kid arrives on the set with all his lines already memorized,” Gina related.

Carmina remarked that Zaijan possesses acting maturity beyond his years. “He knows how to inspire his coactors during a scene,” she said.

Carmina has become so enamored with the young actor that she gifted him with an iPad for his birthday last August. Gina gave Zaijan an iPhone 4s.

Now that “Lorenzo” is on its final stretch, Zaijan said: “I’m sad that the show is ending, but I’m happy and proud that I was able to work with Tita Gina and Tita Carmina … I will miss our kulitan (joking around)!”