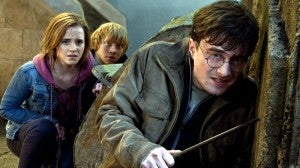 Residents in the Las Piñas-Alabang-Parañaque area no longer have to drive all the way to SM Mall of Asia or North Edsa to enjoy the full Imax 3-D experience.

On July 14, SM opened an Imax Theater in Southmall, with “Harry Potter and the Deathly Hallows Part 2,” grand finale of the popular franchise.

Southmall’s is the fourth Imax in the country—after MoA, North Edsa and Cebu.

Some kids in the audience looked as though they were catching an evil character’s ashes floating seemingly out of the screen.

Jessie Chou, vice president of Imax Theater Operations in Asia, explained that with the latest leaps in technology, movies shown in Imax digital theaters have “enhanced” picture and sound quality.

Screens are 30 percent bigger than the standard cinema. (Imax screens are 12m by 22m as opposed to standard screens that are 8m by 11m.)

This means, for instance, that “Harry Potter” fans can hear with equal clarity the gentle sound of wind chimes and birds chirping in the background, as well as the deafening roar of dragons and other monsters.

The cinema’s unique “theater geometry”/design ensures a field of view that is the same, whether a person is seated in the front, middle or back, Edgar C. Tejerero, SM Cinemas senior vice president, told Inquirer.

Tejerero said SM picked Las Piñas because, “demographically,” the area can support this Imax theater, which seats 480. “We are confident because of the presence of viewers from the A-B market in the area.”

After Southmall, SM has committed to open more Imax theaters: in Clark (by the fourth quarter of the year), and by next year in Davao and Fort Bonifacio, and in 2013 in Megamall.

Will there ever be a Filipino film in Imax? Sen. Ramon “Bong” Revilla Jr. told Inquirer that he’s working on the first Pinoy Imax movie. “We can’t do it this year, but we hope to produce it in time for the Metro Manila Film Festival 2012. In the near future, ‘Panday’ will be in 3-D Imax, too.” Bayani San Diego Jr.