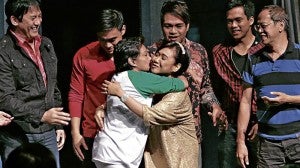 It was supposed to be Bona’s last tango with her hunk.

As expected, the Philippine Educational Theater Association (Peta) Theater in Quezon City was packed on the night of the farewell performance of the play “Bona” on Sept. 23.

At the audience were the original stars of the Lino Brocka film “Bona”: Nora Aunor and Phillip Salvador.

Tanghalang Pilipino’s Nanding Josef, who was also in the film’s cast, attended as well.

The message on Aunor’s T-shirt said it all: “Support Pinoy Artists.”

Aunor bought the shirt at the Peta kiosk and wore it during the entire performance. Inspired, she said that she would gladly sponsor a “return engagement” for the play.

Aunor’s wish was fulfilled because “Bona” was extended for one more weekend.

All five performances, however, have already found buyers, according to Guzman’s manager Noel Ferrer, who was also in charge of the farewell show.

Perhaps Aunor should wait for another restaging so that she could sponsor a show.

Read Next
No giving up tomorrow for 2 filmmakers
EDITORS' PICK
vivo brings to the Philippines a powerful smartphone with a slimmer body, the vivo Y02s for only PHP 6,499
Apple warns of flaw that lets hackers into iPhones, Macs
46% of schools nationwide to have full face-to-face classes on Aug. 22
House energy committee chair Arroyo bats for cheap electricity
What to watch out for when selecting a video surveillance solution
Heads may roll at BOC, says Palace if sugar smugglers are allowed to use recycled import permits
MOST READ
DepEd to give teachers P5K cash allowance within first week of classes
LOOK: Miel Pangilinan dazzles in glittery pre-debut shoot
Man abducted in Batangas gasoline station, found dead in Quezon
Dressing the dead: Indonesian villagers clean corpses in afterlife ritual
Don't miss out on the latest news and information.