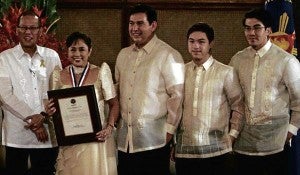 In her home in Alabang, actress and Batangas Gov. Vilma Santos has built an office where she keeps her numerous trophies and plaques—from both the entertainment and political worlds.

Santos, who celebrates her 50th anniversary in show biz this year, told the Philippine Daily Inquirer that she has lost count of the number of best actress trophies on her proverbial mantle (IMDb puts it at about 42).

The actress is no stranger to receiving citations from the movie industry. She’s a grand-slam best actress awardee (for the Ishmael Bernal film “Relasyon” in 1982), a Famas Hall of Famer and a Brussels Independent Film Festival honoree. But this latest addition to her collection is quite significant, according to Santos.

“This means more than just a best actress trophy because it honors my work as a public servant,” she told Inquirer by phone last Wednesday, a few hours after receiving the Lingkod Bayan award from President Aquino in Malacañang. “This isn’t about show biz,” she added. “This is about real life, about making a difference in people’s lives.”

She considers her work in government as her “legacy,” which she could bequeath to her family and constituents in Batangas. “More than fame and power, one’s good name is a treasure,” she said.

Given by the Civil Service Commission (CSC), the Presidential Lingkod Bayan award is the highest honor given to public servants. Among the jurors this year were academicians, government officials, and media practitioners (represented by ABS-CBN president Charo Santos-Concio).

“I didn’t know who the judges were,” Santos related. “When the finalists had a meeting at the CSC a week ago, I told the people gathered there: ‘I don’t know what I am doing here.’” Her self-deprecating honesty made the CSC audience laugh, she recounted.

“Politics is a different world,” she continued. “In show biz, stars are treated like royalty; in government, public officials are servants in the real meaning of the word. A difficult job, but fulfilling.”

Her latest award caused quite a stir online, like the Bisato D’Oro victory of perennial rival Nora Aunor for Brillante Mendoza’s “Thy Womb”—an entry in the recently concluded Venice 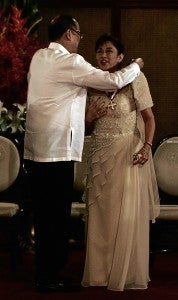 Prior to the Lingkod Bayan ceremony, some of Santos’ fans, dubbed Vilmanians, had been quarrelling on various websites with Noranians, Aunor’s followers, about the latter’s recent award.

“I’ve advised Vilmanians not to fight with anyone,” Santos remarked. “There’s nothing the matter with a little professional rivalry, but don’t hit below the belt, I told them. There’s no need to be rude  and resort to foul language.”

On the other hand, she pays no more attention to her detractors, either. “You can’t please everyone,” she said. “I would rather focus on the people who love me and I am confident that they will always be there for me. They are the fuel that energizes me to perform all my duties in the province.”

She felt humbled to be included in this year’s Lingkod Bayan roster, she said. “This is a national honor. It was inspiring to meet my fellow winners, civil servants from different sectors: Soldiers, teachers, doctors, engineers, auditors.”

After the ceremony at the Palace, Santos also attended the celebration held at the Manila Hotel. “I learned a lot from the stories of my fellow awardees,” she said.

She was particularly moved to see the children of the posthumous honorees—Department of the Interior and Local Government Secretary Jesse Robredo and Department of Environment and Natural Resources specialist Melania Dirain— receive the award from President Aquino.

“Melania fought illegal loggers and she paid for this commitment with her life,” Santos said. “Another honoree, Dr. Welthy Villanueva, remains true to her advocacy while she battles cancer. They are genuine heroes.”

On the big screen, the actress has played feisty and fiery heroines like Darna and Sister Stella L., but her real-life role as public servant is still the most challenging, Santos pointed out.

An incentive program, the Lingkod Bayan honor comes with a P200,000 cash prize, a “promotion” and an educational opportunity. Did “promotion” mean she might run for a national post next year?

“I will run for governor again next year, so I can continue my programs for a last term,” Santos said.

More than the pay hike, she’s excited about the chance to pursue higher studies. “The awardees can study anywhere—University of the Philippines, Asian Institute of Management (AIM), Ateneo … Given time, I’d like to enroll in a Public Administration course at the AIM.”

Since elections are up next year, she’s bound to be very busy campaigning. Did this mean she couldn’t squeeze in another movie—a follow-up to this year’s “The Healing,” directed by Chito Roño?

A planned drama film pitting her against Aunor and Coco Martin, to be megged by Mendoza, is reportedly in the works. Santos said: “I’ve told Direk Brillante … if my schedule permits, I have no problem with the project. I just need to read the script first.”

Still, the province is her priority. “I just received a beautiful offer from another indie production. I love the story and the character—it’s so me. I just have to find time.”