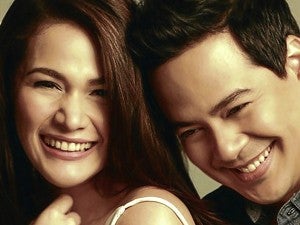 Cruz makes the most of his static if indecisive character, JD Torres, who flirts with master cutter Sari Alfonso (Alonzo)—his “dad” Rico’s (Valdez) mistress for five years. This “open secret” torments his mother, Regina (Koronel), but JD finds it hard to proselytize about love and fidelity, especially because, as it turns out, he is his mother’s love child with another man!

When Sari eventually succumbs to JD’s relentless teasing, things take a turn for the worse—because he finds himself falling for his father’s mistress! But, is he willing to betray the man who accepted him as his own son—and risk turning his alcoholic mother into a basket case?

As with real life, the movie doesn’t offer easy resolutions—which is what sets it apart from most mainstream dramas. It isn’t uncommon for bad things to happen to good people—and we live through our imperfections. But, while many of us learn from our mistakes, it’s hard to see JD, Sari, Rico and Regina as victims, because they’re more than willing to risk everything—and everyone—just to scratch their narcissistic itches.

Moreover, it’s hard to empathize with protagonists who make morally indefensible choices with their eyes wide open. Is it justifiable to forget about what’s right and wrong and play house with a married man just because “life is hard”—and with someone you aren’t sure you genuinely love?

The film derives its “magic formula” from the onscreen chemistry of John Lloyd and Bea, who can turn awkward scenes into “kilig” moments—but, after 10 years as a screen couple, they’re getting to be a little long in the tooth for that. After the protracted “mood” moments that establish Sari and JD as potential lovebirds, the movie stalls and loses much of its storytelling traction, with trite narrative strands that further weigh it down.

The movie is raking it in at the tills—and it owes its crowd-drawing appeal to its young stellar couple’s time-honed reliability as a love team, as well as the anticipated comeback of the glorious Hilda Koronel, who, while prominently billed, is sadly under-utilized. Unfortunately, the movie isn’t as satisfying as Lamasan’s thematically absorbing “In The Name of Love,” the vastly entertaining “In My Life,” or the more emotionally organic “Madrasta.”

John Lloyd is compromised by a poorly developed character, but his formidable dramatic skills see him through—especially in his lengthy (and complex) confrontation scenes with Valdez and Alonzo. Bea does even better—she manages to make her less-than-likable character sympathetic, even when Sari’s choices don’t feel right. But, it’s Valdez who delivers the most textured characterization—he’s hard, uncompromising, kind, selfish and loving at the same time!

What about La Koronel? Today’s teleserye-weaned actors can learn a lot from the refreshingly lovely actress—from the giri-free way she delivers her alternately loving and caustic lines to how she carries her bleeding heart with grace and sophistication.

The iconic actress’ scenes never feel staged, because she doesn’t play for effect. You won’t see her flail and screech like a virago to convey frustration and anger. Indeed, nobody does it like Hilda—and we hope to see more of her! —Watch and learn, guys and gals.