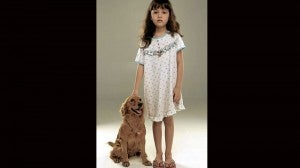 Child star Mona Louise Rey, a juvenile diabetic, doesn’t allow the condition to get in the way of her dream.

The lead star of the newest GMA 7 drama series, “Aso ni San Roque,” Mona was diagnosed at age 7 last year. “Do you want to know my blood sugar level when the doctors discovered I was sick? Promise not to get shocked—it was 658 (milligrams per deciliter or mg/dL)!” she said in Filipino. The normal blood sugar level in humans is between 70 and 180 mg/dL.

Mona said she had adapted a lifestyle meant to keep the illness at bay. “Now my blood sugar level is always between 100 and 200. I’d know when it’s high because the machine (blood glucose meter) would flash “HI.” That means the reading is between 490 and 500.”

The Filipino-Bahraini kid said she had accepted her situation. “I’m not bothered by it anymore. I’ve even learned to inject myself with insulin.”

“Aso ni San Roque” depicts the adventures of a blind girl, Fatima (Mona), and a golden retriever named Anghel (Princess, of “Bwakaw” fame), who acts as her guide. Fatima is the daughter of a mortal man with a mythical creature (manananggal).

Mona said it’s not that difficult to work with a dog, whom she described as “kind and obedient. We love to play. I also have a dog in our house, Lassie (a Pomeranian).”

The young actress laughingly  recalled how she used to cry while playacting with her elder sister. Her mother thought she was crying for real and her sister was about to take a beating when Mona said, “Mama, it’s just acting.”

Her mom’s retort: “I hope someday I can make money out of that.”

Mona joined show biz via the top-rating show “Ang Munting Heredera” in 2011. She was also in the cast of “Luna Blanca: Unang Yugto.”

Asked how she spent her earnings, Mona said: “I put it in the bank. I don’t know if it’s already in the millions, I have no time to check. I plan to use the money for my education, and also for my own needs.”