Vilma Santos: Award is meaningful because it’s for public service 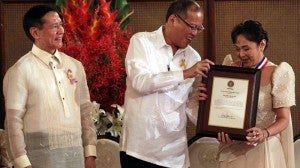 President Benigno S. Aquino III, assisted by Civil Service Commission (CSC) chairman Francisco Duque III, presents the Presidential Lingkod Bayan Award to Batangas Governor Rosa Vilma Santos-Recto during the Awarding rites for the 2012 Outstanding Public Officials and Employees at the Rizal Hall of the Malacañan Palace on Wednesday (September 19). Santos-Recto is cited for daring to fight the toughest battles of the Province of Batangas, addressed the persistent overcrowding in Taal Lake to improve water quality and prevent fish kills. The Lingkod Bayan Award is given to an individual or group of individuals exceptional or extraordinary contributions resulting from an idea or performance that had nationwide impact on public interest, security and patrimony. CONTRIBUTED PHOTO/Jay Morales / Malacañang Photo Bureau

MANILA, Philippines— First thing actress and Batangas Gov. Vilma Santos will do is present her Presidential Lingkod Bayan award to her constituents and co-workers in the provincial capitol.

Wearing a white “terno” by Danilo Franco, Santos received the award with 22 other individual and six group awardees who were honored at the Malacañang Palace Wednesday morning.

Considered the highest honor that a public servant can receive in the Philippines, the award is handed out by the Civil Service Commission (CSC).

“I couldn’t have achieved all this on my own,” she told the Inquirer in a phone interview Wednesday afternoon. “I’m excited to show the plaque and medal to the people in the capitol. They worked side by side with me in pursuing my different programs in the province. Our secret in Batangas is team work.”

She said this honor is special “because it recognizes my work in public service. I think I am the only governor in the line-up. This is a different world from show business. This is not just a best actress award. I’ve received other awards for government service in the past, but it’s my first national recognition. Plus, it was handed out by President Aquino at the Malacañang.”

It was announced at the awarding ceremony that, apart from the plaque and medal, the honorees will likewise receive P200,000 cash prize and a “promotion.”

But since Santos already occupies the highest post in Batangas, will the promotion mean that she would move up to a national post?

“I was asked the same question by CSC officers,” she recalled. “I told them that I’m not running for congressman or senator in next year’s elections. I still want to run as Batangas governor so I can make sure that my programs will be pursued until my third and last term.”

She said she wants to “graduate” as governor, and serve all three three-year terms. “I want to receive my final report card as governor the same way that I received my passing grade as Lipa mayor.”

She related that since winning as Lipa mayor, she has been serving the province for 15 years.

Santos clarified that the “promotion” may come in the form of a salary hike. “My Salary Grade will move up from that of a governor to that of a congressman. It’s a good incentive . . . a great way to inspire public servants to give their best in their respective offices.”

She said that awardees are also given the chance to pursue higher studies in the field and institution of their choice. “We can study anywhere we want: University of the Philippines, Asian Institute of Management (AIM), Ateneo. The CSC will support us in this endeavor. Given time, I’d like to take a master’s in public administration at the AIM. Wow, I hope I can fulfill that dream soon.”

She believes that she won the award because of her various projects—particularly, her health policies in the province.

“We were able to improve the equipment, manpower capabilities and facilities of provincial hospitals,” she said.

She said that she made sure that husband Sen. Ralph Recto and sons Luis Manzano and Ryan Christian Recto were present at the Malacañang Palace, too.

“They are my inspiration. I want to share that important moment in my life with them,” she said. “My family gives me the energy to pursue all my projects in the province. It’s not an easy job, but my family inspires me to never give up in spite of the challenges.”