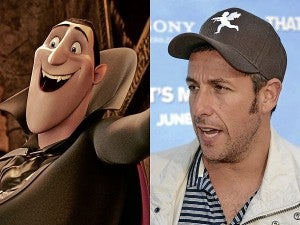 For many, the name Genndy Tartakovsky would be forever synonymous with the clever Cartoon Network series “Dexter’s Laboratory.” The Russian-American animator created “Dexter’s Laboratory” in 1995, directed his share of “The Powerpuff Girls” episodes, then went on to create the cult series “Samurai Jack” before overseeing “Star Wars: The Clone Wars.”

Seemingly out of nowhere, Tartakovsky makes his feature film debut with the 3D-animation comedy “Hotel Transylvania.” It’s a surprisingly nifty fit. The movie features an overly protective Dracula (voiced by a game Adam Sandler, channeling a somewhat jaded and yet comedic version of the Bela Lugosi classic) who builds a monster-only hotel hidden in the mountains of Transylvania in order to keep his daughter Mavis (Selena Gomez of “Wizards of Waverly Place” and Justin Bieber fame) from encountering humans.

But as Mavis is about to turn 118 and seeks to see the world beyond the hotel, the control freak Dracula will do anything to keep her home—something that proves most difficult when a clueless human backpacker (talented “Saturday Night Live” alum Andy Samberg) stumbles on the hotel during its busiest season. Now Dracula must find a way to keep the other guests from finding out there’s a human among them, even as he endeavors to keep Mavis from discovering the rest of the world. 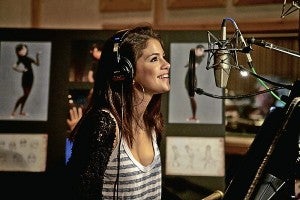 Hilarity ensues, of course, when Dracula finds out it’s going to be harder than he thought. For those who don’t like Sandler’s schtick (he also executive produces), worry not. His Drac makes him unrecognizable and the humor in the movie gets better and faster as it goes along.

“Hotel Transylvania” takes the conceit of monsters being afraid of humans and runs with it while maximizing the weirdness of its kooky guest list, as Tartakovsky’s crew is obviously trying to bring a Pixar-ish vibe to the characters.

By dint of design and voice work, the monsters are modernized and made quite silly, with of that swept up in “Hotel Transylvania’s” relentless joke-per-second pace. The pace allows Tartakovsky to strategically place horror sight gags at every turn.

It also serves to thoroughly defang the monsters and make “Hotel Transylvania” more accessible to younger viewers. There’s something for everyone here: Monster poop jokes, goofy songs and even a well-placed pop culture reference here and there in a movie that ceaselessly shuffles its way to its ending. 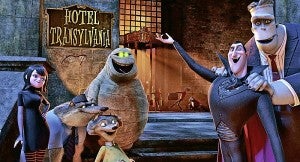 Gomez brings her distinctive bubblegum twang to Mavis while Andy Samberg throws himself completely into the role of Jonathan the backpacker dude. It’s a rowdy mix with “Boardwalk Empire’s” Steve Buscemi as a stressed-out Wayne the Werewolf, comedian Kevin James as a good-natured Frankenstein and musician CeeLo Green as a manic Murray the Mummy (what, no Rob Schneider?).

In a way, the film is a funny look at the classic Hollwood monsters’ family life as well as how they view themselves as compared to how humans view them. It’s a loving lesson laced with laughs. 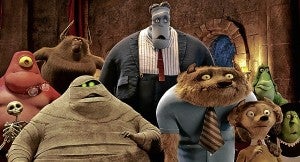 “HOTEL Transylvania”—there’s something for everyone here.

After having created some really memorable original characters previously in his career, Tartakovsky now proves he can just as easily work with existing properties with this film. Then, he will follow “Hotel Transylvania” with a 3D movie update of the spinach-powered sailor “Popeye.”

In the meantime, “Hotel Transylvania” is a solid comedic outing that mixes classic monsters and very modern humor for viewers of all ages, human or otherwise.