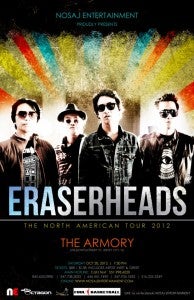 MANILA, Philippines—The Armory in Jersey City, a military training facility where concerts have also been held since the 1960s, is venue for the fourth and final stop of the reunited Eraserheads’ North American tour, one of the presenters, Nosaj Entertainment, confirmed on its official Facebook account Monday.

Dubbed “Eraserheads: The North American Reunion Tour,” the other shows are scheduled at The Regency Ballroom in San Francisco on October 12; Hollywood Palladium in Los Angeles on October 13; and Kool Haus in Queens Quay East, Toronto on October 19.

The show at The Armory is slated on October 20.

The tour’s announcement circulated online in the first week of August and surprised a lot of fans who thought the members won’t regroup again.

On March 7, 2009, the band held their second reunion concert dubbed “Final Set” at the Open Grounds of SM Mall of Asia in Pasay City, which was attended by an estimated 100,000 Filipinos from all over the country, some from abroad. The first reunion was held on August 30, 2008, at the Fort in Taguig City, which was aborted when frontman Ely Buendia suffered a heart attack after finishing a non-stop 15-song first set.

When Buendia left the group in March, 2002, Eraserheads continued playing for a few months with the remaining three members—drummer Raimund Marasigan, lead guitarist Marcus Adoro and bassist Buddy Zabala—and a female vocalist, Kris Gorra of Fatal Posporos. At the time, with animosities between Buendia and the other three, the group preferred to be called Eheads.

Based on existing reports, the group was officially disbanded in the latter part of the 2002 when Adoro left to pursue surfing in La Union. Marasigan and Zabala formed another group, Cambio, with Gorra still on vocals and brought in Ebe Dancel of Sugarfree and Diego Mapa of Monsterbott.

Buendia has since formed his own groups, the now-disbanded The Mongols and his current, Pupil.  He is also widely regarded as a living rock icon in the history of Philippine pop music.

Aside from playing drums for Cambio, Marasigan has since been successful as vocalist-composer of techno-rock-flavored Sandwich, synth player-keyboardist of Pedicab and guitarist of 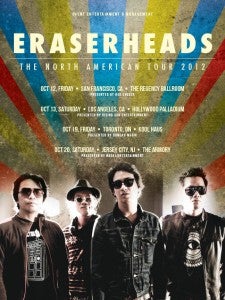 After trying the corporate world as composer-musical arranger for a film production house in Makati City, Zabala in 2005 joined the legendary new wave supergroup, The Dawn, which is led by another music icon, veteran rocker-turned-theater actor Jett Pangan.

Based on earlier reports, The Eraseheads cannot perform again in the Philippines because of a contract they signed with MTV Philippines, the organizer of their 2008-2009 reunion concerts, which prohibits the members to play together anywhere in the country for the next 10 years.