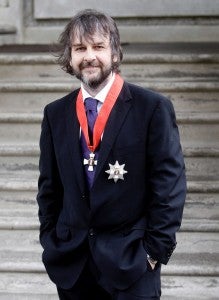 “Lord of the Rings” trilogy director Sir Peter Jackson smiles after his investiture as Knight Companion of the New Zealand Order of Merit at Premier House in Wellington on April 28, 2010. AFP FILE PHOTO

The director of the epic “Lord of the Rings” trilogy said the decision to make three films was possible because of the extended appendices in that novel, in which Tolkien adds details of the Middle Earth fantasy world that provides the setting for “The Hobbit.”

But during a press conference in Toronto, a moderator told the public that Jackson would not take any questions unrelated to “West of Memphis,” a film he directed and starring Johnny Depp that was premiering in Canada.

Subsequent calls to Jackson’s publicists were not returned.

Tolkien fans claim that Jackson is seeking to cash by dragging out stories into several films to reap more box office revenue, or has run out of new ideas.

In a similar trend, “Harry Potter” turned the seventh and final of the novel series – “Deathly Hallows” – into two separate movies, and continued with the “Twilight” and “The Hunger Games” franchises.

Tolkien himself has been derided as a writer in need of a cutthroat editor.

“Lord of the Rings,” written between 1937 and 1949 as a sequel to “The Hobbit,” was originally intended by Tolkien to be one book, but his publisher insisted on releasing it as three tomes for economic reasons.

The three Hobbit films are entitled “An Unexpected Journey,” “The Desolation of Smaug” and “There and Back Again,” and released between December 2012 and July 2014.