Rico J, the other Puno: Funny, then it got scary | Inquirer Entertainment
Close
menu
search

Rico J, the other Puno: Funny, then it got scary 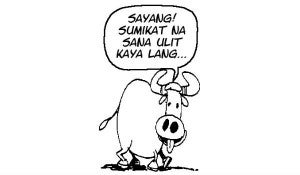 MANILA, Philippines—Call it his second wind.

Singer Rico J. Puno, once dubbed the Total Entertainer when he dominated the local pop music scene in the mid-70s, has again found fame—for being the namesake of Rico E. Puno, Undersecretary for Peace and Order of the Department of the Interior and Local Government.

Being the namesake of a top government official had its moments, Rico J said.

He recalled: “One time I was at a birthday party for Vice President (Jejomar) Binay (where) Mrs. (Imelda) Marcos was a guest. Eh ninang ko yon sa kasal (she was a principal sponsor at my wedding), so I approached her. She said, ‘O Rico, mag-uusap tayo ha (let’s talk, okay?).’ When I asked her what about, she replied, ‘Hindi ba sa DILG ka na ngayon (Aren’t you now with the DILG)?”

Born Enrico de Jesus Puno, Rico J recounted how friends congratulated him for his supposed appointment as a DILG official.  People would also visit him at his restaurant-club, now named Chico Rico, on P. Ocampo (formerly Vito Cruz) Extension in Makati City, he said. “Sabi ko, tapatin niyo nga ako, ano ba’ng kailangan niyo (I’d tell them, can you be honest, what is it that you want)?, and they would say, ‘Baka naman pwede tayong mag-business (Perhaps we can do business).”

Sharing Usec Rico Puno’s name has become more alarming, he said, with recent news that the DILG official is allegedly involved in attempts to enter the condo unit and office of the late Interior Secretary Jesse Robredo a day after the latter was reported missing in a plane crash in waters off Masbate City.

“People have started calling me up again (and) it bothers me,” the singer said.  “The public should really be informed … that I am the singer, not the government official. I have posted this notice on Facebook and Twitter.”

Rico J had actually been active in politics, having served as a Makati councilor from 1987-2007. He lost his bid to be Makati vice mayor in the 2010 election.

“I still help in the city government, but only when I’m needed,” he said.

These days, he keeps busy with a series of shows in several casinos operated by the Philippine Amusement and Gaming Corp (Pagcor). But he has become wary about cracking jokes during his shows, he admitted. “Might be misinterpreted,” he said.

Asked if he is related to the DILG official, Rico J said: “The former Supreme Court Justice Ricardo C. Puno once said that (people) surnamed Puno are somehow related, and hail from Pampanga. My father is from Pampanga.”

The next time he is asked about his namesake, Rico J quipped: “Ang sasabihin ko, dun ho tayo sa Araneta Coliseum, pwede ko kayong ipasyal dun. (I will say, let’s go to the Smart Araneta Coliseum, I can take you there for a visit).