Colin Farrell on the challenges of kissing his director’s wife 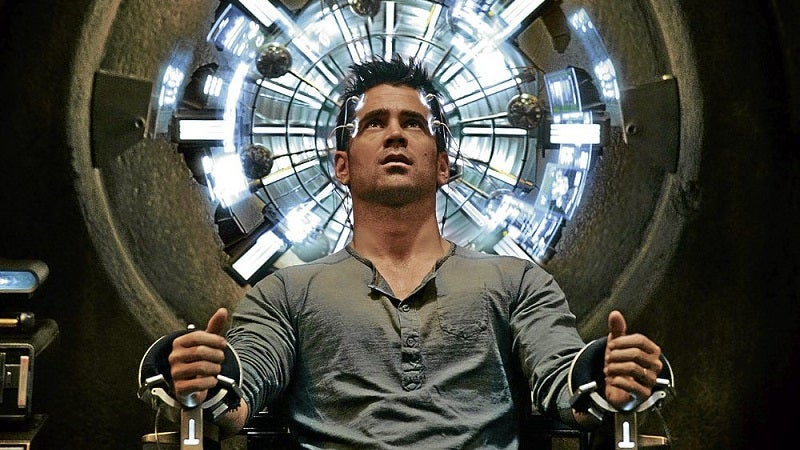 LOS ANGELES – For Colin Farrell, starring in the remake of “Total Recall” posed a different challenge aside from the obvious physical demands of the action role. He had to kiss Kate Beckinsale, who plays his wife in the film, in front of director Len Wiseman—who happens to be the actress’ real-life spouse.

Colin told us that smooching Kate while Len was watching was what stood out in his memories of making a new version of the film that starred Arnold Schwarzenegger. This sci-fi action remake also stars Jessica Biel, Bryan Cranston, Bill Nighy, Bokeem Woodbine and John Cho. “My memories are of kissing the director’s wife. It was one of the most uncomfortable days I’ve had on a film set. I’m so glad we didn’t get past first base in the script.”

The actor added, “Kissing Kate was a bit tricky. You don’t kiss another man’s woman when he’s looking.” He joked, “You have to cover his eyes.”

Colin quickly clarified with a grin, “No, joking. Len is by the monitor.” But, he dished, “I hear a certain anxiousness in the timbre of his voice when he shouts, ‘Cut!’”

The actor said of Kate and Len, “They’re quite close and affectionate toward each other, so it was nice. It was a little weird at first. I was like, ‘What is my ‘wife’ doing, sitting on the director’s lap?’” He quipped, “It was like, ‘Why am I not sitting on his lap? He has two legs.’ Then, I was like, ‘Of course, they’re married!’ They’re husband and wife. It was lovely.”

“They have a good understanding of each other,” he described the director-actress tandem. “They’ve worked together three or four times, so they have a shorthand.”

Of Kate herself, Colin said, “She’s tough. Kate seems very dainty, but she’s very strong, driven and physically capable. There was one scene where she had to chop me in the throat. I didn’t have to ask her to go any harder. It was cool, man.”

Asked about the most complicated scene to shoot in the film, Colin replied, “Maybe the fight sequence where they had these three super sliders that they put together. Len triangulated them. It’s technically complicated.”

Colin continued, “And, there’s a scene toward the end, where Jessica, a few other lads, and I are in zero gravity. That was pretty tricky—it was fun and silly.

There’s a moment where we’re upside down, right side up, but they shot us upside down, so we’re on wires from the hips upside down. Blood is pumping to your head and you can feel a vein beginning to pop.”

With a laugh, he shared, “You’re trying to act slow and calm, and you’re getting pinched and getting a wedgie. That was really complicated—to keep your movement as economical as we’ve seen all movement is in zero gravity. Any slight movement and you’ll jerk on those wires—and the whole thing is gone!”

On his memories about watching the original movie, he said, “I was in my teens when it came out, so I was probably too young to go to the cinema, because it would have been R-rated. I probably watched it on VHS back in the day, but I did it see four or five times since then. I love the original. I went back and watched it when I knew I was going to do this, just to see what it was like.”

His verdict? “It’s still good,” Colin answered. “It’s such an entertaining film. Some effects are a little dated, but that’s par for the course—the movie is 22 years old! There were a couple of things in the original that I wouldn’t have minded bringing into our film. But, that was the 15-year-old in me speaking. I had to quietly, gently shut him up and say, we’re going in a different direction because, tonally, the script is different from the original. It follows the same plot contrivances and the character’s name, but it felt very different.”

Colin admitted, “I wondered when I was watching the original after I had signed on to do the film if I was going to feel a little regret even before getting to the set. But, I was fine with it. It’s very extreme! I know why some people are fanatical about it but, our film is very different.”