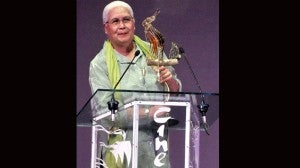 She tried to be anonymous, but her strikingly silver hair shimmered in the darkened movie house.

Veteran actress Ama Quiambao sat unobtrusively in one corner to watch the digitally restored version of Ishmael Bernal’s “Himala (Miracle),” which was screened for a select audience at SM North Edsa recently.

Just as quietly as she arrived, she left discreetly—wanting to avoid a possible fuss.

“That was me 40 pounds ago,” she joked after the screening.

“Himala,” released in 1982, was her screen debut, she recalled. Prior to “Himala,” she was a regular in the plays mounted by Teatro Pilipino at the Cultural Center of the Philippines.

Married to the late opera singer Gamaliel Viray, Quiambao considered herself a “late bloomer” as an actress.

“My first play was ‘Ang Mga Tagahabi,’ directed by Rolando Tinio in the 1970s,” she recounted. “It was his adaptation of Gerhart Hauptmann’s ‘The Weavers.’ I was a drama student at Philippine Normal University at the time.”

Now she has a master’s degree in teaching drama education from the University of the Philippines in Diliman. 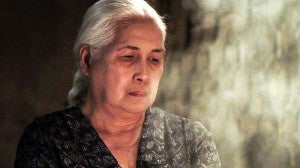 QUIAMBAO as Lusing in “Diablo”: “We’re opposites,” she says of the character.

Bernal, who was a friend of Tinio’s, wanted to cast theater and radio talents opposite superstar Nora Aunor in “Himala.” Tinio gave Quiambao’s name to Bernal and, after a short conversation with the filmmaker, she bagged the role of Sepa, one of the devotees of Aunor’s character, Elsa, in “Himala.”

Although seemingly one of Tinio’s favorite actresses, she wasn’t spared the stage director’s fiery temper.

She related: “I had to wear a swimsuit in the play ‘Mga Kuwentong Katawatawa.’ During rehearsals, I was shy, so I wrapped a towel around my body.” Tinio was furious. “He rushed up the stage and tore the towel off me.”

Even so, “Katawatawa” remains to be a favorite of hers because she played a cougar. “I portrayed a rich socialite who had affairs with younger men. Tony Mabesa played my husband and Ray Ventura, my lover.”

Ventura played her husband in “Himala.”

“How I miss Ray,” said Quiambao. “While watching ‘Himala,’ I realized that I had already lost several of my coworkers there.”

She remembered that she thoroughly enjoyed the shoot of the now classic feature, which will be shown next week at the prestigious Venice International Film Festival.

She recounted: “It was like a picnic. We shot for a month in Ilocos Norte. The ending was the last scene we shot.”

The film’s climax gave her a chance to shine, too. Recalled scriptwriter Ricky Lee: “Ama was daunted by that scene because she had to deliver long lines of dialogue while walking up a hill. She was scared that she might trip on the rocks.”

Quiambao was nominated for best supporting actress in the critics’ Urian awards that year. “I didn’t win,” she said, “but was happy because I got recognized for my first movie.”

“Now, that’s a miracle,” she said of her first triumph. “I wanted Mes and our film to win. But I was rooting for [fellow theater thespian] Shamaine Centenera-Buencamino [for ‘REquieme!’].”

When her name was called as best actress, Quiambao had just returned from the ladies’ room.

“I was strangely calm,” she recalled. “I didn’t feel cold; I didn’t cry. I was glad that the trophy was presented to me by Iza [Calzado]. I’ve worked with her a number of times on TV and in the movies. I love that girl.”

She said credit should go to indie filmmakers for “daring to tell stories that focus on older characters. They are not afraid to go against popular tastes.”

Since the mainstream movie industry is obsessed with youth, “it’s rare for senior actors to land plum parts,” she observed.

“But indie films allow us to tackle meaty roles. Gina Pareño won all those international awards for ‘Kubrador.’ For me, Gina has one of the most dramatic faces in Philippine cinema,” she said.

Quiambao is grateful to her director, De Guzman, and his producer-wife, Rhea, for allowing her to play Lusing, the stern matriarch at the center of “Diablo.”

She continued: “Lusing is my exact opposite. I love to giggle. During the shoot, Mes and I would joke around. Rhea would gently remind us to be serious. While Mes would soar with these fantastic ideas, she kept us grounded. They’re a good team.”

(E-mail the author at [email protected])