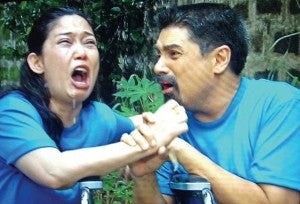 As a rule, we encourage veteran stars to make comebacks because their performances are generally superior to the shallow and callow portrayals that the typical young tyros turn in these days. So, we made it a point to catch Maricel Soriano’s recent performance on the anthology drama show, “Untold Stories.”

Maricel played a wheelchair-bound woman who had to contend with one emotional blow after another, dealt by people who professed to love her, but made her life a living hell just the same.

The final blow came when she discovered that the daughter she had been struggling to put through school to improve her career and financial prospects had gotten pregnant. So much for the better future and freedom from economic difficulties that they had been working so hard to attain!

And how did Maricel fare? We liked her complete “commitment” to the emotionally rigorous role, but she went over the top too often for her portrayal to generally emerge as a success.

We know that it’s tempting for actors to “go to town” complying with a role’s “extreme” demands, but viewers can take only so much empathetic emotional battering before really crying ouch!

On the plus side, we’re glad that Maricel is playing more mature characters. There was a time when she appeared to be (unsuccessfully) trying to hold back the encroaching years by continuing to rely on her old performing shticks that made her a popular TV-film personality during her younger years. These included her hyper and ack-ack delivery, the saucy putdown, the flippant star turns, etc.

Alas, they no longer worked for her, and ended up making her look “TH” and out of touch with the new times. So, we’re relieved to see that she no longer resorts to them, and has come to terms with the realities of her new status as a “more mature” actress.

Some other veteran stars are still unable to make that key transition, so they continue to embarrass themselves with their “time-warped” portrayals.

Goodness, their fans are already grandparents, and yet they continue to act like they used to decades ago and expect to still be warmly received by today’s viewers!

We hope that Maricel’s more “updated” portrayal on “Untold Stories” will help them come to the realization that the reason that their careers are on a dead-end street is because they continue to live in the distant past, instead of keeping up with the rapidly changing times.

While making that all-important transition, they should also realize that the new performing times and climes don’t only require them to act their real age, but to also drop the now hokey histrionics of the past, which relied on attention-calling “external” acting (for “display” purposes).

These days, while melodrama still rules TV-movie screens, the acting style is more internalized and felt, and they should make that key adjustment, as well. Even Maricel needs to do more in this regard, so we trust that she’s up to the additional work at hand.