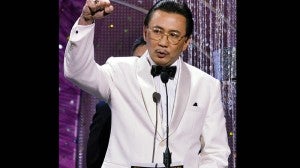 Other winners announced during the program were:

The program hosts were Rez Cortez and Katya Santos.