Uma Thurman is a compelling presence on ‘Smash’ 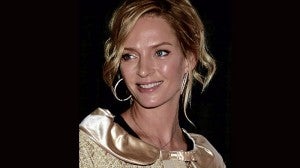 MANILA, Philippines – We used to watch the musical drama series, “Smash,” quite regularly, because its focus on the creation of a new stage musical is of enormous interest to us. However, there came a time when the show’s excessively detailed focus on its characters’ private lives, problems and issues made our attention wander.

These days, however, we’re back to watching the series each week. What has excited us about it all over again? The continuing guest performance of our favourite actress, Uma Thurman.

She plays a film star who’s tapped to play the lead character of Marilyn Monroe in the late screen icon’s musical bio-drama.

Because she’s a big star who’s used to getting her way, Uma’s character quickly gets on the bad side of the show’s director, who finally blows his top and reads her the riot act.

Thus does the series make a thematic point of the fact that the theater has a more professional tradition of correct conduct than the movies, and that even stars have to toe the line and work harmoniously with other members of the production company, big or small.

Thurman is a joy to watch in “Smash.” Although her character is spoiled and bratty, she goes way beyond those signature defining qualities and shows many other sides to the big star’s persona. She’s too tall and lanky to be completely credible as Marilyn, but she’s so fascinating and resourceful as a performer that her “limitation” really doesn’t matter much.

Aside from her unique beauty and those Uma Thurman eyes (step aside, Bette Davis), she is a compelling presence in “Smash” and ends up “owning” each and every scene she’s in, despite the formidable presence of similarly famous thespians like Anjelica Huston and Debra Messing.

As for newcomer Katharine McPhee, who’s ostensibly the series’ lead player, she knows only too well that she can’t hold a candle up to Thurman, so she wisely cedes all of their scenes together to her iconic coplayer, content to make her mark in scenes that don’t feature the series’ preeminent guest star.

Yes, Uma is no longer a spring chicken and isn’t as amazingly lovely as she used to be. But, she’s still a sight to behold, and her talent is now the principal element that keeps acolytes like us transfixed. We daresay that, even in her 50s or 60s, she will remain a luminous and iconic thespic presence in our midst.

For her part, Katharine McPhee is doing so well in “Smash” that she has similarly transcended her start in “American Idol,” and has joined Jennifer Hudson’s exclusive club for “Idol” alumni who have scored points not just as sensational singers, but as actors and all-around performers, as well!