South African actors are both quite taken with their new Christine, who sees little of the mentor-protégé bond with the iconic antihero
By: Emmie G. Velarde
Philippine Daily Inquirer / 09:27 PM August 22, 2012 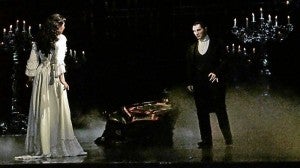 JONATHAN Roxmouth in the recently concluded staging of the musical in Johannesburg. “Close your eyes and surrender to your darkest dream,” he sings as Phantom. In the photo as Christine is Magdelene Minnaar. photo by:EMMIE G. VELARDE

Claire Lyon, classically trained Australian soprano, foresees “passionate love” more than the usual mad mentor-protégé bond between Phantom and Christine, lead characters in “The Phantom of the Opera,” for the enduring musical’s Manila run that starts this week.

At the recent press launch of the Lunchbox Theatrical Productions presentation, Lyon told the Inquirer: “The Phantom as a character is going to change, depending on who the actor is. Jonathan (Roxmouth, who plays Phantom) and I (she plays Christine) are the same age, so you can see the relationship in this case…”

We did glimpse that—actually, we sensed a blossoming offstage triangle, maybe romantic, maybe not. Roxmouth, 25, whispered to us, “You should see this Christine.” Anthony Downing, who plays Raoul, Phantom’s rival for the girl’s affection, is also under 30 and just as obviously taken with Lyon. He described her as “fantastic.” 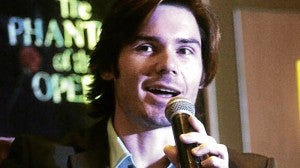 Roxmouth and Downing are South Africans and had just finished a nine-month run of the Andrew Lloyd Webber musical in Johannesburg. Every performance was sold out.

For a little pop perspective: In the play, Phantom, a most compelling antihero, performs “Music of the Night” and Raoul, “That’s All I Ask Of You”—the most eagerly awaited and best-applauded numbers.

The three lead actors flew into town in possibly the worst hours of monsoon rains and metro flooding earlier this month. “It was alarming at first,” Lyon said. And since she had come in hours ahead of the others, “I kept wondering if Jonathan would get here at all.” 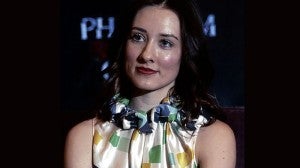 Roxmouth himself jested about his midnight touchdown: “It wasn’t bad at all, sailing in.” Downing had found the wet welcome “exciting” and said he planned to see more of the country.

The whole cast had been rehearsing, they said—at the GSIS Auditorium, we heard, since the venue, the Cultural Center of the Philippines, was still being transformed into Paris Opera House at the turn of the century.  The lead trio described the musical fine-tuning in as many ways as “enthusiastically” could be defined.

“Amazing,” Downing said. “Best ever,” Lyon agreed. Roxmouth marvelled at “these outstanding voice technicians that I’m performing with—they must be aliens!” He said this was the first time he was doing “Phantom” with a “truly international cast—from eight countries, no less.” It was one of two major thrills he was savoring. The other was “the prospect of performing for an audience that’s seeing the play for the first time … I understand ‘Phantom’ has never been staged here.”

Roxmouth figured that, on opening night on Saturday (for Asian Hospital Charities), he would be donning the famous mask for an audience for the 300th time. 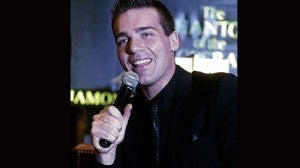 On the other hand, Lyon is playing Christine sort of backwards. Last year she joined the original Australian cast of “Love Never Dies,” sequel to “Phantom,” to understudy the role, which she got to perform several times. Was the time warp undermining or enhancing her interpretation for the Philippine season?

“Approaching Christine for this   run, I feel I have the advantage of wisdom,” Lyon said. “Because I was in her shoes in ‘Love Never Dies,’ I know what sort of person she would be evolving into—and so I’m not going in totally blind here, so to speak.”

In short, she had the character, and the situation, down pat. “Christine is most definitely sympathetic towards Phantom. She shows him compassion, the one thing he has never experienced before. This is one of the reasons that he falls so madly in love with her.”

We argued: Compassionate, Christine may be; clever, a little … not! The actress rose to the character’s defense. “While Christine is young and naïve in the beginning of the story, she actually grows into a strong woman who does make her own decisions.” 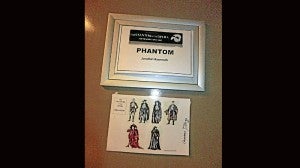 This empathy, we would soon learn, was rooted in Lyon’s own story. “Christine starts off as a ballerina and a chorus girl, then turns into an opera star. This is very similar to my career. I trained in classical ballet for 15 years and also sang with Opera Australia as a full-time soprano chorister. Now, like Christine, I’ve become the leading lady!”

Talk about parallel dreams: Of actresses   who have played the role, her model is American Sierra Boggess. “She’s one of only a few girls in the world who have played Christine in both ‘Phantom’ and ‘Love Never Dies.’”

Last year, to celebrate the musical’s 25th anniversary (which makes “Phantom” as old as Lyon and Roxmouth), original producer Cameron Mackintosh mounted what was hailed as “a unique, spectacular staging … on a scale that had not been seen before” at the Royal Albert Hall in London.  It starred Boggess opposite Iranian-Canadian Ramin Karimloo as Phantom.

Lyon said she had been singing “Phantom” songs since she was 3 (“so Christine is my absolute dream role”) and that she read the 1910 novel by Gaston Leroux on which “Phantom” is based. In spite of women around the world coming into gender power, she insisted that this story of a beautiful, talented girl and a twisted genius/suitor was still very much relevant. “It’s essentially a love story; it can never be irrelevant.” 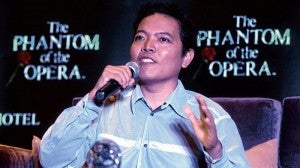 The “Phantom” slot is a dream, too, for Filipino tenor Dondi Ong, but for a more pragmatic reason. At the press launch, he gamely dished both the expected line, “It’s an honor for any artist to be in the company of these exceptional international performers”; and the refreshingly unexpected: “For the first time in my career, I’m not worried about whether or not there will be an audience.”

Although a bit of a maverick (he’s been singing with the new Electromaniacs and dabbling in rock!), he said he was happy to not find one thing in his new colleagues: “Attitude—I was expecting a lot of it, and did not get even a little.”

Ong is joining the ensemble for this run and the rest of the Asian dates and covering Piangi, which is being played by another South African, Thabiso Masemene. Ong will have to wear a fat suit under the elaborate costume, as Masemene does. “That is one heavy piece of gear,” said Ong. 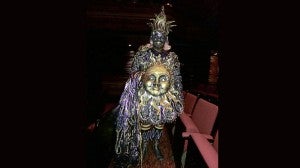 No such thing for Raoul, who only has to look matinee-idol dashing. And clean-cut. Thus, Downing, who has grown his hair back down to the nape in the interim between Joburg and Manila, is going to have to give up the youngish-artist look again. “Maybe I should talk to the producers about this,” he jested.

As Raoul challenges Phantom, so do Downing’s credentials hew close to Roxmouth’s. For instance, Downing is a piano pro as well. Two years ago, he won the Meyer Levison Prize from the University of Capetown for best original composition. He’s had several of his original songs performed on South African radio.

Asked to choose between acting in musical theater and composing, he protested, “I can’t live by just one of them. I’ve spent quite a lot of time mastering each. I started playing the piano at 6, so it’s a huge piece of my life.”

It’s Downing’s first time in Asia, “a part of the world that has always called to me.” He admitted that, for the longest time, Asia for him meant China. “I’d like to go there,” he said. “Some of my songwriting is based on Chinese imagery. I would also like to see Indonesia—Bali—that side of Asia.”

Like Downing, Lyon is planning to stay behind after the CCP dates, possibly to venture outside Manila—individually, as far as we know. Roxmouth initially planned to do the same, but said his schedules changed just before he left Joburg and so he had to head back immediately.

Hmm, Phantom out of the way!

“Only then can you belong to me.”

Downing feels that Phantom’s signature number, “Music of the Night,” is the musical’s absolute highlight. “It’s a brilliant song. I’ve sung it, but I haven’t performed it, you know? I’d love to do that.”

Passion and a full-blown rivalry? Manila is bound to watch this.