John Lennon’s killer up for parole for seventh time 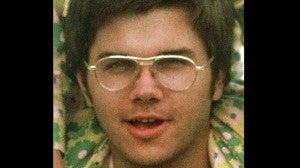 In this 1975 file photo, Mark David Chapman is seen at Fort Chaffee near Fort Smith, Ark. New York Department of Corrections spokeswoman Linda Foglia says Chapman, who shot former Beatle John Lennon to death in 1980, is scheduled to be interviewed by members of the parole board during the week of Aug. 20, 2012. This will be the seventh time Chapman will seek parole. AP Photo/Greg Lyuan, File

NEW YORK—Mark David Chapman, the disturbed man who shot dead Beatles frontman John Lennon, is up for parole for the seventh time, with a decision expected later this week, prison officials said Sunday.

The hearing is set to begin on Tuesday and will last two to three days, New York State prison service spokeswoman Linda Foglia told AFP, adding that she expects a decision “by the end of the week.”

Chapman, 57, was sentenced in 1981 to between 20 years and life in prison for Lennon’s murder on December 8, 1980, as the legendary singer-songwriter was walking with his wife Yoko Ono to their home by New York’s Central Park.

Chapman, who was mentally unstable and just 25 at the time, had staked out the musician’s apartment building.

Earlier in the day the musician had even autographed a copy of his latest album “Double Fantasy” for the man who would kill him.

Chapman eventually pleaded guilty to the murder, and is currently being held at the Wende maximum security prison in Alden, New York.

Read Next
Beyoncé’s UN video prompts humanitarian outpouring
EDITORS' PICK
Metro Manila’s daily COVID-19 growth rate drops to 2% — Octa Research
Over 3 Million worth of prizes to be won at Smart Padala’s SENDali Manalo Promo!
SMDC’s Bloom Residences: A master planned community that cares for your health and wellness
What to expect as Metro Manila starts ‘no vaccination, no ride’ policy on Monday
COVID-19 cases in PH pass 3.2 million mark with 37,154 new cases — DOH
Upsilon, Unilever give ‘real talk’ on climate change crisis
MOST READ
IATF protocols now apply to travelers who arrived on or before Jan. 13
‘Not my loss’: Did Kris Aquino just comment on her breakup with Mel Sarmiento?
Thailand records first Omicron death
Tito, Vic and Joey still not quitting, breaking trends as they celebrate 50th year in the biz
Don't miss out on the latest news and information.