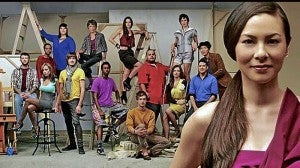 FOR years now, we’ve been urging TV producers to give the arts the importance and perceptive coverage they deserve, to raise viewers’ understanding of our shared essence and identity.

Alas, the request has gone generally unheeded, because TV people feel that viewers aren’t interested in “heart and soul” issues, or are daunted by them, and thus prefer to get shallow, throwaway entertainment.

To make things worse, some of the few arts-oriented shows we do get are lazy and predictable productions that don’t capture the excitement and empathetic significance of the lives of creative artists and their seminal works, and instead reinforce the nasty notion that the arts are difficult to understand, lofty—and excruciatingly dull.

Recently, however, we watched a show on the Velvet channel, “Work of Art,” that effectively debunks that hoary notion, and serves as an example of how arts programs can be exciting, provocative and fun.

We hope that local TV producers get to watch it or other shows of the same enlightened and perceptive bent, and get inspired enough to come up with similar programs for Filipino viewers.

“Work of Art” is like the visual arts’ version of singing tilts like “American Idol”: It fields a group of gifted visual artists who compete against each other in different challenges each week, until the best of them square off in the tilt’s finals.

One of the telecasts we caught showed the surviving finalists as they tackled a particularly interesting challenge that merged both “high” and “low” art objectives, by having the artists come up with works that they could sell as street art—and still pass the higher standards of gallery patrons and the tilt’s even more discriminating jurors.

We were intrigued by the challenge’s fusion of two usually disparate artistic concerns—for the artist to come up with integral works that speak of his essence and vision, and to make art that sells.

Indeed, that combination and contradiction are relevant to many artists’ careers, so it was an inspired move for the show to tackle it by way of its “street vs. gallery” challenge.

To make the contest more exciting, the winning pair of artists whose works grossed the most in the streets would win a hefty $30,000 for their pains—and the race was on!

It was instructive to see how the artists adjusted their vision to come up with “more sellable” works—including a contestant’s clever ploy to pose in the nude for a photograph that she then made copies of, for her prospective buyers’ delectation!

But, there was more than nudity involved, since she also included in her artwork a number of “secrets” and “true confessions” that served as an intriguing “verbal corollary” to her visual daring.

The insightful juxtaposition wasn’t lost on the judges—and she survived to compete for another week!

Shows like “Work of Art” should prompt our TV people to be of similarly instructive and provocative service to local viewers, to show them that the arts should be a key part of the warp and woof of our lives, not just a stylish diversion.