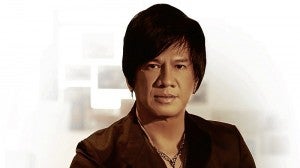 Side A frontman (for 23 years) Joey Generoso has fulfilled a dream—his first solo album. He considers the move a return to his roots, since he was a folk singer before joining the band.

How different is the album from your work with Side A?

It’s for personal expression. And it’s like starting over. I’ve been spoiled by Side A. At times, all I needed to do was wait for my cue. Now I have to do everything.

What was your band mates’ reaction?

They were all excited and very supportive. One of the songs in the album, “For You,” was written by our bassist, Ned Esguerra.

The good thing about Side A is that we are free to do whatever we want. Naldy Gonzales composes songs for other artists. And during his time, Joey Benin wrote “I Believe in Dreams” for Janno Gibbs.

That’s one of the reasons we lasted this long in the industry. We’re too old to indulge in petty jealousies.

Was there a conscious effort to create a new sound?

I can’t come up with something entirely different yet. I don’t want to alienate the fans and leave them wondering if it’s still me they’re listening to. But the session players and arrangers were different.

How about the theme?

Love songs pa rin. I’m especially proud of “I’ll Be,” which was composed by Diane Warren (for Warner Philippines)—the woman behind the songs “I Don’t Want to Miss a Thing” and “Love Will Lead You Back.”

Another favorite of mine is “1000 Miles A Minute.” People say I sound like a 20-year-old when I sing that song. I didn’t write any songs for this one, but I’m planning to record an all-Tagalog album in the future, with my own material.

Your past albums with Side A generally sold well. Any pressure there?

I have nothing more to prove; I’m past that. Just holding my solo album makes me happy—moves me to tears!

What makes your songs enduring?

I’ve been told I have a great voice! (Laughs.) But it’s not just about me. It’s a group effort involving arrangers, etc. You can have a great song, but without the right packaging, you can’t turn it into a hit.
You’ve been around for more than two decades. Could you do anything better?

Learning is a nonstop process. If you stop learning, you’re good as dead as a musician. I breathe music.