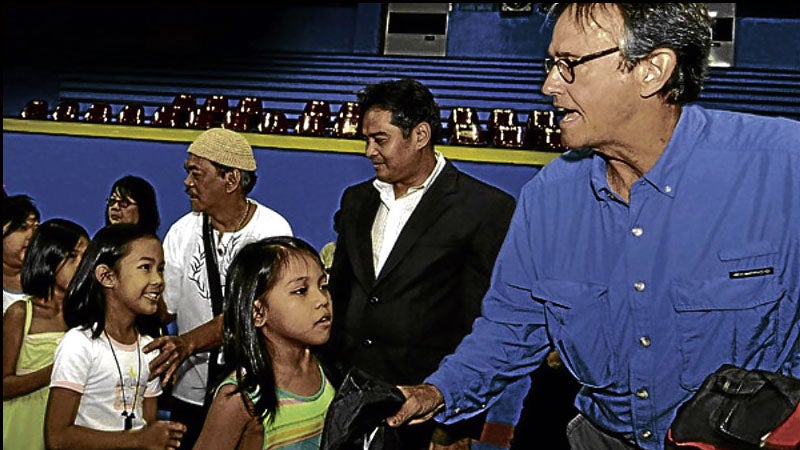 PRODUCER Pat Crowley (right), with actors John Arcilla (in suit) and Lou Veloso after the shoot, during a gift-giving event for the children of San Andres

Most of the Filipino and Filipino-American cast members hired to be a part of The Bourne Legacy are ordinary citizens with normal day jobs. For some of them, the opportunity to be a part of this highly-successful film franchise was an opportunity too good to pass up. Never mind waking up really early in the morning to prepare for a 3:00 am call time for three days straight, or just plain waiting on the set for hours for their scenes to be shot.

“It was a rare opportunity for our NYC based Fil-Ams to be part of a historic movie featuring our country, the Philippines,” actor Luis Pedron said. “We will not only see talents from the Philippines like John Arcilla and Lou Veloso but also local ordinary people from the NYC area.”

Pedron got a call from Grant Wilfley Casting to be part of the group of Filipino actors during the initial two-day shoot at the American Airlines Terminal of the JFK airport.

“Since the scenes were going thru TSA and boarding a real American Airlines plane (even though it was still on the ground) we had to go through American Airlines ticketing counter and get ticketed and pass through TSA every day.  We had to present our ID’s every day as if we were really boarding an international flight to Manila,” he said.

Then came the other big scene a few days later which needed a lot of Filipinos.

Luis got a call again from Grant Wilfley to play one of the supervisors at the factory interior that was supposed to be in the Philippines.  In addition, since they knew he was active in the Filipino community and he speaks Filipino, they also hired him to help out in calling the Filipino actors in their casting office.

For Troi Santos and his wife Mapet, the opportunity to be a part of the film was presented when their good friend Luis told them about the project.

Their photos were taken for casting at the Bayanihan office in Woodside. Then, they waited for the call.

“The first time we got our text message confirmation, factory worker din ako but a few days before the first day, they asked me to bring two sets of casual clothes with specific color preferences as my wardrobe.  Me and my wife Mapet got three SAG waivers after the shoot, which made us SAG eligible,” Troi said.

Troi had no speaking lines in the film, but he had four scenes that were shot, and he remembers them vividly.

“I was shot while in the factory talking to factory workers (and we were) walking towards the camera where Jeremy and Rachel will come out of the door after we pass. Then at the hallway near the manager’s office talking to male and female managers, in cat walk working on a computer where Jeremy and Rachel will pass by running and in the manager’s room window looking outside to check commotion,” he said.

Troi, Mapet and their friends are excited to see which of the scenes they shot actually made it on the final cut. They arranged a Bourne Legacy viewing party in New York City on Friday, August 10, the film’s opening day in the US.

Indeed, it is safe to say that The Bourne Legacy is one of the films that Filipinos around the world is waiting to watch since we are curious as to how the gritty streets of Manila and the pristine waters of Palawan would look like on the screen.

For Filipinos in New York, the film is an opportunity to see and watch on the big screen people we may know in our every day lives – a friend from college, a tita, a community leader, a neighbor or a co-worker.

Like Blue Sevilla, a New York-based finance professional who answered the open call for the factory scene.

“From hearing of the initial call-out, I thought it was a rare and special thing that Filipinos were specifically sought out for a major feature film. I couldn’t miss this chance to be in on a signature

Fil-Am/Hollywood event just in my backyard,” Sevilla said.  “I hope this helps build even more momentum for further Pinoy exposure and success in film and the arts.”

Asked about the working environment in the film, Santos was all praises.

“The New York crew was fantastic, very respectful and very kind. Magulo kasi sa umaga. We come in at 2:30am for the 3:00 am call time. We get our vouchers, fill it up, get breakfast, wardrobe, props then wait for call. I don’t have to go to wardrobe kasi they asked me to bring my own. Yung mga factory workers, they have to go through wardrobe and hair kung mahaba ang buhok mo,” he shared.

For his wife Mapet, it was a dream come true.

“It has always been my dream to be in a Hollywood film, and to be in one of such magnitude is surreal. I was in awe the first time I stepped in the film location and star-struck to be in the scene with the A-list actors,” Troi’s wife Mapet said.

Pedron, a veteran in the film industry and a film festival organizer,  on the other hand relishes the fact that he was able to work with fellow Filipinos in a major Hollywood project.

“I have never felt so good working on a project specially that some of my closest friends were on set. It was truly a blessing to be able to share my world to them. It was truly memorable. I miss cabbing together with Troi and Mapet Santos, Victor Palmos early in the morning and eating with my Filipino peeps during the wonderfully catered lunch,” Pedron said.

He is also proud that he was hired as a translator for the Filipino group on set. “I can’t believe I was hired not only as an actor who looked Pinoy and is a genuine Pinoy, I also got paid Hollywood wages to speak our language as a translator in a Hollywood set here in America. That’s unusual and oh so humbling but exciting,” he said.

Veteran actor John Arcilla is one of the local Filipino actors hired in the Philippines.

In a statement he sent to the Asian Journal for this story, Arcilla expressed his excitement about the project, as well as his apprehension.

“I am really a bit scared about this showing, I’m afraid that Filipinos will tell each other ‘yun lang pala ang role ko…because it is really just a small part,” he said.

Arcilla got his role not because he was already famous in the Philippines. Just like everyone else, he worked hard to get that role. In his previous interviews, he explained that what he really found significant in the process was his experience as an actor during his audition.  Among the roster of big names and good actors from television, theater and film who auditioned, he was the one chosen for this short role.

“Working with these Hollywood stars is amazing. I never felt a star complex from them at all. No intimidating bones whatsoever,” he shared.

Hollywood journalist Ruben Nepales interviewed the director and cast members and asked them about their experience working with Filipino actors in the Philippines and they had nothing but praises.

“The guy who plays Joseph (Arcilla) at the factory gave an amazing performance. I remember we started rehearsing the scene to get blocked in. […] He’s brilliant,” Gilroy told Nepales in the interview.

Arcilla read the articles, and to say the least, he was both thrilled and relieved.

Director Tony Gilroy told the Inquirer that “He is a brilliant actor” and in Rachel’s separate interview told the press that “particularly, he is a wonderful actor”.

“I wish you can see my biggest smile I ever had in the name of compliments,” Arcilla added, saying that with this one, he actually experienced the old cliché ‘There are no small parts, only small actors’.

For some members of the cast, a major highlight of this experience was the opportunity to see how a big-budget Hollywood film (from a successful franchise at that) is made.

“The highlight for me was being able to see Tony Gilroy work. I’ve been a fan of his other work even before the Bourne series, and to be in the same set with him as a director was definitely exciting,” said Adelina Amosco, who also played the role of a factory manager.

Gilroy is the Academy-award nominated director who also wrote all the previous Bourne films that starred Matt Damon – The Bourne Identity, The Bourne Supremacy and The Bourne Ultimatum.

“We were briefed by Director Gilroy in the morning explaining the scenes. He’s a really nice guy,” Santos said.

“Director Tony Gilroy was very hands on on set. He was very meticulous,” Pedron added.

For Kenneth Yanga, an NYC/Arizona-based filmmaker who worked in the Bourne project in Manila as art coordinator, it is an experience he will never forget.

“The Bourne Legacy is by far the biggest budget film I’ve ever been a part of.  When I walked into the office my first day, I was really nervous but both the foreign and the local Filipino crew made me feel right at home,” Yanga said. “Everybody was so nice and enthusiastic. We all supported each other which really helped since working on films can get stressful. During those 3 months, we all bonded and I definitely gained a family.”