As the rain pours, the music beckons 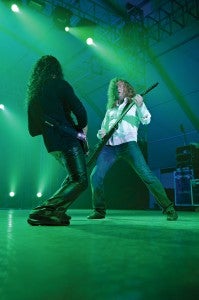 Wet weather failed to dampen the spirits of about 1,000 metalheads eager to watch Megadeth whose leader, Dave Mustaine, was the first lead guitarist and a cosongwriter of Metallica until he was fired in 1983. Mustaine has reportedly mellowed from his former death-defying lifestyle. A right arm injury he suffered 10 years ago must’ve taught him not to strain himself too much playing the electric guitar.

That night, Megadeth’s other guitarist, Chris Broderick, handled most of the solos, which flew at breakneck speed in classic thrash metal tradition.

But Mustaine, now 50, was far from being a doddering has-been as he engaged Broderick in riff-trading duels on several numbers.

When Mustaine sang, or rather growled, he sounded like a monster smoking out his enemies; Broderick’s lead lines, on the other hand, wailed like an ambulance racing against time.

Most of the band’s songs harped on anger and violence—though they were not misdirected as some folks might have thought. “Never Dead” and “Headcrasher,” for instance, were about hired killers and torture, respectively.

What fans love about thrash metal is its aggressive stance against wrongdoing; that’s why the power and loudness of the music lead to a catharsis.

At the Megadeth concert, downing Colt 45 while headbanging to the kerrang of guitars and rolling thunder of double-bass drums surely beat cursing the downpour outside. 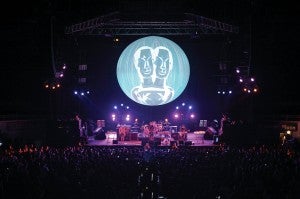 A GIGANTIC ball above the stage serves as a video screen.

Originally scheduled Aug. 7 but reset the next day due to the unrelenting rains, the Smashing Pumpkins gig nonetheless brought joy to some 3,000 hardy souls seeking respite from the harsh climate.

The first half of the show was devoted to the band’s latest album, “Oceania,” which frontman Billy Corgan described at a press con on Aug. 6 as an attempt to deal with alienation and reconnect with reality.

A gigantic ball hanging above the stage symbolized the earth while also serving as a video screen that showed images of life’s origins and mysteries, as the band cranked up a guitar-driven wall of sound fortified by programmed keyboards.

When Corgan intoned, “God, right on! Krishna, right on!” on “Quasar,” it was like hearing a hippie preaching about spirituality amid an avalanche of psychedelic sounds.

If, by chance, there were folks in the audience who were once flower children, they would’ve thought Corgan was merely recreating the famed gigs at Fillmore East in New York in the late 1960s.

A number of Caucasians were seen enjoying the show. For the first time, the Big Dome ran out of beer to sell. 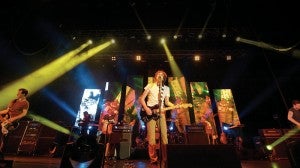 It was still cloudy earlier in the day but no sign of rain, which goaded Snow Patrol’s Pinoy fans to come and watch the band. Some 5,000 people made it to the Big Dome; a festive atmosphere prevailed.

The band played a type of brooding, introspective but melodious rock that appealed a lot to couples possibly reflecting on cherished or regretful moments.

Most of the songs’ sedate rhythms verged on the boring. Good thing there was also interesting percussion interplay between drummer Jonny Quinn and somebody who was banging on a kettledrum.

The martial beat on “Make This Go On Forever” provided a counterpoint to the song’s hopeful lyrics.

“Shut your eyes and sing to me,” crooned frontman Gary Lightbody on another number, as he asked the crowd to join him in the chorus. The women happily obliged.

Everyone went wild upon hearing the band’s biggest hit, “Chasing Cars.” Though it sounded sad, the song was about being with a loved one and letting the world go hang.

Indeed, nobody cared if it rained hard again—and it did.