Tears for Fears for all ages | Inquirer Entertainment

Tears for Fears for all ages

Tears for Fears lift the spirits of Filipinos for two nights at the Smart Araneta Coliseum.  Video by INQUIRER.net’s Totel V. de Jesus

MANILA, Philippines—Starting with their politically charged hit from the 1980s, “Everybody Wants To Rule The World,” Tears For Fears (TFF) filled the more than 15,000-seat Smart Araneta Coliseum to the rafters on Saturday, their second night in their three-day tour to the calamity-stricken Philippines.

“Like the first time we were here, you seem to know all the songs we play,” said fellow frontman-guitarist Roland Orzabal, who co-founded TFF with Smith in the early 1980s.

Smith said the previous night, Friday, the coliseum was also full and everybody was singing with them. He challenged the crowd—a curious mix of two to 62-year-olds—to do the same.

One of those seating at the patron seats was Mon Lopez, a 36-year-old businessman, who brought his two boys aged two and four because, he told us, “my wife couldn’t make it and I want to expose my kids to music at an early age.”

The two boys, whose names we didn’t bother to ask, sometime fell asleep when the numbers turned slow but would stand up and listen to the faster TFF’s danceable hits “Mad World,” “Sowing The Seeds Of Love,” “Break It Down Again,” “Change,” “Pale Shelter,” “Woman In Chain” and their most popular, “Shout,” the last song that turned the Big Dome into a big videoke party.

On his 62nd birthday, American expat businessman John Cage (no relation to the legendary musician) was one of those “modern audience members” armed with a digital video camera, raised constantly with his right hand to capture the more than 10 songs performed by TFF.  How he maintained the camera steady and in focus to the performers while dancing is a talent he has also mastered. 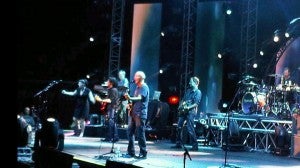 Cage told us unlike in the 1980s and the 1990s when audience held lighters while dancing, nowadays people bring glow-in-the-dark sticks and digital gadgets.  “I understand people want to record the songs. It’s OK with cell phones and handy video cameras. What surprises and pisses me off are those holding tablets,” he said, pointing to some guys with their smartphones and tabs, like Moses’s clones trying to part a black sea of human heads.

Basing on Cage’s observation, it seemed the two kids were the ones who enjoyed TFF the most, more than those who consciously tried to record the songs with their digital cameras.

Outside, TFF T-shirts and CDs are selling fast. Orzabal said like their first night, all the proceeds from the T-shirt sales and other merchandise like TFF dolls—that looked like Barbie and Kent, as Orzabal said in jest earlier—will be donated to the Philippine Red Cross for the benefit of flood victims. When we asked around, a shirt of any size is priced at P1,000.

“OK lang, pangkawanggawa naman eh (It’s OK, it’s for charity),” said 55-year-old Jenny Miranda, while trying to catch her breath. She said she had a hard time getting in and out of the small crowd gathering around the T-shirt stall at the Red Gate.

When TFF first performed in the Philippines in May, 2010 for a one-night-only gig also at the Big Dome, the clamor for a return bombarded the local producer, Ovation Productions.  Thus the three shows, which will have its final instalment Sunday night at the Waterfront Hotel in Cebu.

As early as now, on various social networking sites, there are already requests for more shows at the end of the year.

Which brings us to a rather strange conclusion: As the new most well-loved foreign act for the Filipino audience, is TFF the new Air Supply?