A meaningful birthday for Mariel 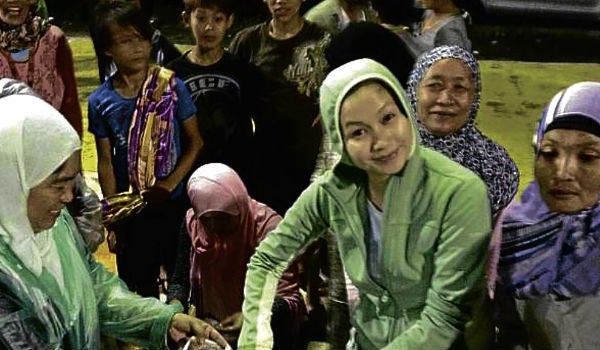 ROBIN took this picture of Mariel distributing sahur to Muslim families. Sahur (or suhur) is a light meal eaten before daybreak during the month of Ramadan.

TV host Mariel Rodriguez chose to celebrate her 28th birthday on August 10 with neighbors in West Fairview, Quezon City, who were affected by the nonstop monsoon rains that flooded 80 percent of Metro Manila.

“My wife is happy even though I don’t have a gift for her,” said Mariel’s husband, actor Robin Padilla. 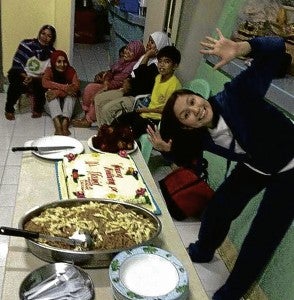 DAYS after she cooked arroz caldo and adobo for some 300 flood victims, Mariel celebrated her birthday on Friday with family and friends by serving pancit and cake.

He posted the comment via Instagram (the social networking site) on Friday, along with pictures of the birthday girl standing beside a long table filled with food.

The couple served dinner—pancit, cake and some fruits—to Muslim families that temporarily took shelter at the Paaralan ng Liwanag ng Kapayapaan Foundation (PLKP) in West Fairview, which is owned by Robin.

The Padillas have worked tirelessly for three straight days since Tuesday, delivering food and other essentials to their neighbors.

Mariel, who called it “Operation Kapitbahay,” cooked arroz caldo and adobo, among others.

Robin, on the other hand, dubbed it “Operation Hot Food.” He took charge of distributing relief goods to evacuation centers, as well as to those stranded in their homes. 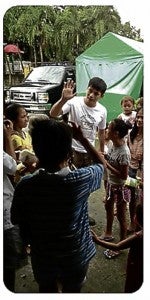 “WE’RE on a medical mission now. Robin bought antibiotics to give to our neighbors,” said Mariel on her Instagram.

That day, he bought medicines and led the team that distributed them to hundreds of sick victims in the area.

Also on August 9, Robin announced that some 800 bags of relief goods will be delivered to fellow Muslims inside the New Bilibid Prison in Muntinlupa City, where he served time in the 1990s after being convicted for illegal possession of firearms.

“Please follow the person who influenced me to be a better person,” said Mariel of Robin in her August 8 message on Instagram.

In another entry, she added: “He’s in the hospital right now, making sure that older flood victims are given medical attention. God bless my husband for his kind heart.”