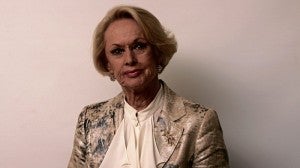 HEDREN. The master of suspense lived up to his name.

LOS ANGELES—It turns out that there was a real-life horror story behind the making of Alfred Hitchcock’s classic thriller, “The Birds.” In an interview for HBO’s “The Girl,” which chronicles actress Tippi Hedren’s troubled relationship with Hitchcock, she talked about the harassment she experienced while working with the master of suspense.

“The Girl” was adapted from Donald Spoto’s book, “Spellbound by Beauty: Alfred Hitchcock and His Leading Ladies,” which details the director’s sexual harassment of Tippi while making “The Birds” nearly 50 years ago. Tippi, the mother of Melanie Griffith, was engaged at the time, but Hitchcock, who was married to Alma Reville, was undeterred. Tippi rejected his sexual advances. “The Girl” suggests that Hitchcock punished the actress as a result.

Sienna Miller plays Tippi, while Toby Jones is cast as Hitchcock in the HBO production directed by Julian Jarrold, from the script by Gwyneth Hughes.

“Donald is the first person I ever told this story to,” Tippi confided. “It was embarrassing and insulting—there were a lot of reasons why I didn’t want to tell the story. I didn’t want it to be taken advantage of, twisted, turned and made into an even uglier situation than it was. It wasn’t until years later that I told Donald the story. He then devoted Chapter 13 of ‘The Dark Side of Genius: The Life of Alfred Hitchcock’ to the Hitchcock-Hedren years. He is absolutely true and honest in this book.” (Donald published “Dark Side…” in 1983; “Spellbound…” came out in 2008.)

Tippi still vividly remembers the real horror of shooting the attic scene in “The Birds.” “I remember it well,” she stressed. “When I first read the script, I said, ‘Mr. Hitchcock, why would I go upstairs? First of all, after knowing what happened to everybody in town, the children and all the farmers?’ He said, ‘Because I tell you to.’ Well, that was fine. But, the second question I asked was, ‘How would we be doing the filming of those birds when they start to attack me? He said, ‘We’ll use mechanical birds like we do with the children.’”

But, when Tippi went out to the set, “There was a cage with four boxes of ravens, gulls and a few pigeons thrown in. Bird trainers with gauntlets up to their shoulders hurled birds, one after the other, at me for one week. As days went by, it just became worse and worse.”

“It was a nightmare! I ended up in a doctor’s care for a week. Hitchcock said, ‘She can’t rest for a week. We have nobody else to film.’ The doctor said, ‘What are you trying to do, kill her?’ I didn’t hear Hitchcock’s answer.”

Tippi recounted how Hitchcock sabotaged her career. “The way he ruined my career was when I got out of ‘The Birds’ and ‘Marnie,’ I was, as the expression goes, hot in Hollywood,” she said. “All the producers and directors wanted me for their films. They had to go through him to get to me. All he had to do was say that ‘she isn’t available.’ It was so easy for him.”

The veteran actress recalled her reaction upon seeing “The Girl” for the first time. “I can’t tell you what it was like to have a story about yourself told, and it’s so true. “At the end of the screening, nobody moved. Nobody said anything, until my daughter, Melanie, jumped up and said, ‘Now I have to go back into therapy.’ That’s my daughter!”

Tippi hopes that the film “will empower young women to know that you do not have to acquiesce to the demands of anyone ever.

“Here I was dealing with one of the most powerful men in motion pictures. It was difficult, embarrassing and insulting. It was something I had to get out of. I didn’t care. He said, ‘I will ruin your career.’ I said, ‘Do what you have to do. I want out!’”

Tippi admitted that Hitchcock had “good sides.” She said, “He was also my drama coach. The interesting sessions that we had about how an actor develops, breaks down a script, develops a character, figures out the relationships of the other people in the movie—there was so much that went on that was absolutely fabulous and useful to me for the rest of my career.”

“He was probably one of the greatest storytellers,” Tippi acknowledged. “He knew how to manipulate his audiences. He was brilliant at choosing stories that he wanted to tell. He had a great sense of humor. He would tell jokes during filming.”

But being sexually harassed by Hitchcock negated everything. “I wasn’t interested in being the object of someone’s obsession,” she emphasized. “It was horrible!”

Tippi claimed that she got over this “horrible” experience “a long time ago.” She explained, “Because I know people who were hurt very badly, and their lives were ruined by it. I thought, I am not doing that.”

At 82, Tippi looks gorgeous. The animal activist, who runs a sanctuary for exotic felines, half-jokingly explained why she remains lovely.

“Stress is the answer, because I have so much stress in my life dealing with the big cats—the lions and tigers that are born in the United States to be sold as pets or for financial gain, and keeping the Shambala Preserve open,” she said. “I have to raise $75,000 every month. If you don’t think that causes stress, I’ll hand it over to you, and you give it a shot!”