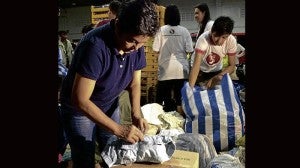 Instead of feeling helpless, some show biz denizens have opted to be proactive and help fellow Filipinos affected by the floods wrought by monsoon rains this week.

On Facebook, actor Ping Medina is reviving his Barangay Soup Kitchen project, which he organized three years ago in the aftermath of tropical storm Ondoy. The soup kitchen provided piping hot arroz caldo to evacuees. Medina recruited his mom, writer Chupsie Medina, and staffers of his PenPen Restaurant, along with fellow actors Alessandra de Rossi and Raphe Fernandez to do the groceries and supervise the kitchen.

He explained that Barangay Soup Kitchen “is not just about distributing relief goods. It’s about extending a hand and a warm smile. A bowl of arroz caldo offered with love shows that we care.” 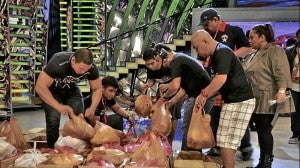 This time around, he is appealing for donations of arroz caldo ingredients, large pots and industrial mobile burners. Pickup trucks for transportation are also welcome, he said. “We will be cooking on the site,” he said. (Find him on Facebook.)

The hosts and producers of “Eat Bulaga” took a break from games and gags and encouraged fans to donate goods in addition to what they had gathered. 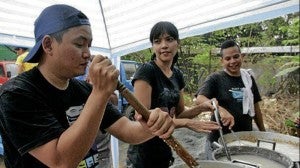 ALESSANDRA de Rossi cooked arroz caldo at the first Barangay soup kitchen organized by Ping Medina, who has revived it this week.

Also on Wednesday, actress-politician Vilma Santos visited her constituents in Bgy. Buso-Buso in Laurel, Batangas, where she held office for the day.

The networks have mounted their own telethons. 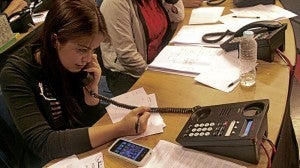 Kapuso couple Regine Velasquez and Ogie Alcasid opened their Twitter account to requests for assistance. Fellow Kapuso star Rhian Ramos posted on Twitter: “If there’s anyone in Alabang following me, let me know if you want to donate. I’m willing to pick up.”

On Facebook, actor Romano Vasquez appealed to netizens to help the babies and patients stranded at the flooded UERM and De los Santos Medical Center in Quezon City. 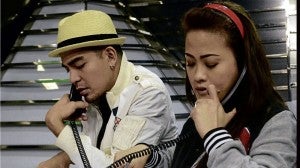 Actor Epy Quizon told the Inquirer that he and his siblings are mounting a golf tournament (in Eastridge on Aug. 20) and a free concert at the Arena (in SM Mall of Asia on Aug. 31). “All three networks will unite in the concert, which is a calamity fund drive under the Dolphy Aid Para sa Pinoy Foundation.”