After the flood, Tears for Fears for three nights

MANILA, Philippines—The first time British band Tears for Fears performed live in Manila two years ago, the screams from its Filipino fans were so loud that the group’s core members, Roland Orzabal and Curt Smith, were visibly overwhelmed. 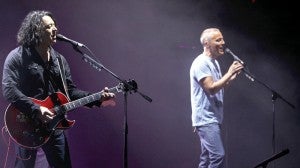 TEARS for Fears founders Roland Orzabal (left) and Curt Smith parted ways in 1991, but got back together in 2000 to record a new album. The duo toured with a full band in 2010.

On Wednesday (Aug. 8), the band arrived at the Ninoy Aquino International Airport for a series of shows starting Friday (Aug. 10) and Saturday at the Smart Araneta Coliseum, and on Sunday at the Waterfront Cebu Hotel.

The return engagement comes at a time when residents of Metro Manila and its surrounding towns, including provinces up North, are struggling to rise up amid the death and destruction wrought by monsoon rains for the past week.

The band’s co-founder, bassist and vocalist, Curt Smith, posted this message on his Twitter account: “Much love to all my Filipino friends dealing with the devastating weather and floods. We will attempt to bring some good cheer with us!”

Formed in 1981 by Smith and his teenage buddy Roland Orzabal, Tears for Fears was influenced by synthesizer pop and New Wave music, and initially inspired by the concept of primal therapy as a way of dealing with emotional distress and trauma.

All the songs contained in the band’s 1983 debut album, “The Hurting,” were said to have references to “primal scream” therapy – the need to confront or “shout out” one’s neurosis and hangups in order to get over them. This was particularly evident in such tracks “Mad World,” “Change” and “Pale Shelter.”

Two years later, Tears for Fears gained worldwide fame with its second album, “Songs from the Big Chair,” whose songs included commentaries on politics (“Shout”) and lust for power (“Everybody Wants to Rule the World”), among other themes.

At the time, the Philippines was experiencing turmoil following the assassination of former Sen. Benigno “Ninoy” Aquino, father of President Noynoy Aquino, and the songs of Tears for Fears resonated among the Filipino youth.

Not long after the release of the band’s third album, “The Seeds of Love,” Orzabal and Smith had a falling out; Smith left the band although Orzabal carried on with new band mates and still using the name Tears for Fears.

In 2000 Orzabal and Smith patched up their differences and went back into the studio to record new songs. The result was “Everybody Loves a Happy Ending,” released in 2005 and which served as the impetus for the band to go on a limited-date tour of Asia including Manila.

Tickets to the Aug. 10 show at the Big Dome have reportedly been sold out, which led promoter Renen de Guia of Ovation Productions to add the Aug. 11 date.

A sidelight to the concert is the special appearance of Per Sorensen, former lead singer of the defunct Norwegian group Fra Lippo Lippi. At the launch of his new album, “Master of Imperfection,” on Tuesday, Sorensen told the Inquirer that he has been battling depression for the past six years.

Asked to elaborate, Sorensen said that his mental health had been affected by “a mixture of many things,” including his personal life, childhood, money, and the weather. “November in Norway is dark, rainy and cold,” he said.

Hopefully the skies would have cleared up when he and Tears for Fears go onstage on Friday night.