The best gift for Buboy 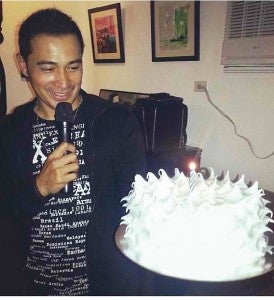 Cesar Montano celebrated his birthday at his resto Bellisimo in its new location on Scout Rallos, Quezon City. Buboy was in high spirits as he sang to his heart’s delight.

What did Sunshine and their kids give him as a gift? “Our daughters kept their promise—all have good grades, which is the best gift for me,” Buboy beamed. “And Shine cooked my fave dish, Jambalaya.”

I had never seen him more fit.

“I am preparing for my role as Andres Bonifacio; I have to look the part,” he said. “I run everyday to become leaner.”

Asked which hero role is harder to play—Bonifacio or Jose Rizal (whom he has portrayed on film), he replied, “Rizal was very gentle in his approach; Bonifacio was aggressive. Portraying Bonifacio is more stressful.”

The birthday boy is a real hero himself. I can vouch for that and so can people he has met along the way.

I got nostalgic when I interviewed Kuya Germs (German Moreno) days before my Mom’s birthday since they were very close.

He clarified the tampuhan (rift) between him and Nora Aunor. “We are both too old for that,” he said. “Mine is just concern for her. She’s generous to a fault. I reminded her that she should learn to save.”

(In Nora’s TV interview on TV5’s “Ang Latest,” she said she was old enough to know what she was doing and need not be lectured about her finances.)

The fire in Kuya Germs’ heart to help new talents has not died. “These days, millions are spent for a star search,” he said. “In the time of ‘That’s Entertainment,’ the cost was minimal. It was like a workshop on air for young stars.”

Lucy Torres-Gomez has no reason to worry about her unica hija, Juliana, since boys are not yet in her vocabulary.

“She’s so into fencing; she took after he dad.” Lucy said. “When she asked me what a French kiss was, I said it was somewhat like the clashing of swords in fencing. She blurted out, ‘Eeew!’ I also told her that when she gets her first kiss, no matter how magical it feels, she should not think that he’s already the one for her.”

“Tears for Fears Live in Manila 2012” on Aug. 10 and 11 at the Smart Araneta Coliseum also features Per Sorensen of Fra Lippo Lippi. A third show is set on August 12 at the Waterfront Cebu Hotel.