Brillante headed back to Venice fest 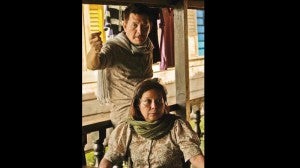 “Thy Womb,” Filipino filmmaker Brillante Mendoza’s new film, about seafaring Badjaos, is headed to Venice—though not literally sailing on a vinta.

It will compete in the main section of the 69th Venice International Film Festival, to be held from Aug. 28 to Sept. 8.

Mendoza is vying for the top prize against Olivier Assayas of France, and Terence Malick and Brian de Palma of the United States.

(“Genghis Khan,” a film by Manuel Conde and Lou Salvador, will be presented in a special retrospective section featuring past Venice entries.)

Mendoza told the Inquirer that he’s happy about returning to Venice.

“But it’s not just about going back to Italy,” he said. “I’m more excited about sharing the story of Badjaos with the whole world. I will get the chance to present a different face of Mindanao.”

Early this year, Mendoza competed in Berlin with another film set in Mindanao— “Captive,” about the 2001 kidnapping of foreigners and Filipinos by the Abu Sayyaf.

“In ‘Captive,’ I tackled violence in Mindanao. In ‘Thy Womb,’ I focused on a peace-loving people who live in Tawi-Tawi, a group of islands in the far south,” he said.

The Badjaos’ story proves just how multi-faceted our country is, he pointed out.

“I am not denying that there is conflict and poverty in our country, but there are untold stories in our midst,” he pointed out. “Mindanao has many sides.”

“I never knew there was such a story in our country,” he said. “The Badjaos are a gentle, passive people, not aggressive or quarrelsome, and very much capable of unconditional love.”

Mendoza observed that while his more controversial and “graphic” movies land in Cannes and Berlin, his more sober and serene films are chosen by Venice. In 2009, Mendoza’s “Lola,” starring acting legend Anita Linda, was shown as a surprise entry in Venice.

“Notice that ‘Lola’ revolves around the unconditional love of two grandmothers for their grandsons—one a murder victim, the other a criminal.”

At the time of this interview, Mendoza was putting the finishing touches on “Thy Womb.”

“I earlier sent a rough cut. We are now doing the final edit and scoring to meet the deadline,” he related.

Before she left for the United States, Aunor told the Inquirer that she was looking forward to the film’s premiere in Venice.

She said in Filipino: “I hope that more of our movies will be shown abroad so that we can continue what we started in the past, with our films ‘Bona,’ ‘Himala’ and ‘The Flor Contemplacion

Story.’ Hopefully, this will inspire other local producers to invest in more high-quality, socially relevant films.”

“Thy Womb’s” Venice invite somehow lessens the sting of its noninclusion in this year’s Metro Manila Film Festival.

“Okay lang ’yon, said Mendoza. “I am sure the MMFF committee has its reasons for not picking my movie.”