Vilma-Kim starrer scares up a storm 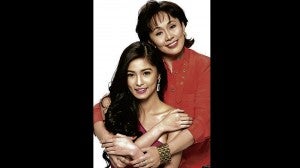 Vilma Santos’ chiller with Kim Chiu is guaranteed to make viewers squirm and scream in their seats.

Chito Roño’s “The Healing” operates on an engaging premise: Encouraged by the miraculous healing of her sickly, 74-year-old dad (Robert Arevalo) in the hands of Manang Elsa (Daria Ramirez), Seth (Santos) takes her close friends (Janice de Belen, Pokwang, Ces Quesada, Cris Villanueva, etc.) to the faith healer to rid them and their loved ones of their illnesses.

Soon thereafter, Seth’s son, Jed (Martin del Rosario), begs her to take Cookie (Chiu), her estranged husband’s (Mark Gil) daughter with his new wife (Carmi Martin), to Elsa because of a lingering kidney problem even doctors can’t get a handle on.

But, after Elsa resurrects a dead person (Jhong Hilario) by mistake and is consequently attacked by the same patient, Seth begins seeing doppelgangers of her friends in dire danger. With time running out, Seth must find a way to reverse the curse on everybody dear to her. Moreover, what will it take to save Cookie?

When Seth realizes that she holds the key to breaking the curse, she embarks on a mission that requires her to get rid of, not just the symptom, but the source of evil itself! The situation becomes a dicier moral dilemma, however, when she is forced to “approximate” the ruthlessness of the sinister evil force she wishes to exorcise. —Where the heck is Darna when you need her most?!

Santos’ spine-tingler is far from original, but as it tweaks the narrative conceit that has made “Final Destination” a box-office-busting film franchise, the movie finds innovative ways to establish an atmosphere of impending doom that keeps viewers on the edge of their seats: You feel that something gruesome is about to transpire, you just don’t know how it will play out—or when!

The Star for All Seasons decided to make the film because she wanted to add something “new” to her formidable oeuvre—and, with “The Healing,” Santos accomplishes exactly that.

The role doesn’t require her to do much except run in circles or look worried or scared. But, she displays flashes of dramatic brilliance when she is hounded by guilt, a motivation that presents her with forks in the road that just might lead to the resolution of the horrifying story’s main conflict.

More than anything, it’s a treat to see the durable actress on the big screen again. The horror-thriller genre she dabbles in effectively introduces her to a younger (and wider) viewing demographic that derives pleasure from getting scared out of its wits.

As for Kim, Roño manages to reduce the distracting squeakiness of her voice—she now looks (and sounds) her age. Unfortunately, she’s required to do even less than Ate Vi—which isn’t a problem if it gives you pleasure to see two of the country’s most popular female stars scream their lungs out as they chase those pesky demons away!