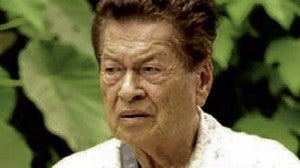 The beginning of our Cinemalaya movie marathon this year was far from auspicious. Last Saturday, at Greenbelt, the first two screenings we attended (Loy Arcenas’ “Requieme” and Mes de Guzman’s “Diablo”) stopped after 20 minutes, so we decided to refund our ticket for the third title on our list, because we didn’t want to risk another annoying no-show —which was a pity, because both films began exceedingly well.

We were especially drawn to De Guzman’s moody domestic drama, because its crisp visuals and engaging premise transported us to the gloomy world of old Nana Lusing (Ama Quiambao), who sleeps restlessly as a mysterious, sinister-looking shadow watches over her.

Her story continued to unfold when we watched the film again, this time in its entirety, at Trinoma—where the digital images looked perplexingly darker than the story of the lonely protagonist and her five sons!

Quiambao’s luminous turn is just one of many standout portrayals in the eighth edition of the eagerly anticipated indie festival. While it’s true that the themes of this year’s entries are more excitingly diverse, last year’s films were better-realized—even the underwhelming “Cuchera” and “Teoriya.”

This year, two of our top picks come from the Directors’ Showcase—Jun Lana’s “Bwakaw,” about an old man and his constant canine companion, and Lawrence Fajardo’s “Posas,” on police corruption and brutality—while four are from the New Breed section—Vincent Sandoval’s “Aparisyon,” which tackles religious hypocrisy, De Guzman’s “Diablo,” Arcenas’ “Requieme” and Marie Jamora’s exhilarating “Ang Nawawala,” about guilt and the redeeming power of love in its many forms.

It’s hard to beat Eddie Garcia’s tragicomic turn in “Bwakaw” as the curmudgeonly Rene, a closeted gay septuagenarian who finds comfort in the company of his loyal askal pet, who follows him wherever he goes. Soxy Topacio and the pitch-perfect Joey Paras are also exceptional as Eddie’s doting and flamingly hilarious amigas.

In Jamora’s bittersweet coming-of-age romance, “Ang Nawawala,” Dominic Roco delivers a well-limned performance as Gibson, who copes with guilt by going mute after he witnesses the death of his twin brother, Jamie (portrayed with similar thespic fervor by Dominic’s real-life twin, Felix). He gets his chance at salvation when he falls in love with Enid (the refreshing Annicka Dolonius), who still carries a torch for her two-timing ex-boyfriend.

As nuns facing the harrowing realities of rape and the stultifying limitations imposed on them by their chosen vocation, Mylene Dizon, Jodi Sta. Maria, Fides Cuyugan-Asencio and Raquel Villavicencio deliver stunning portrayals in Sandoval’s gut-wrenching “Aparisyon.”

Other noteworthy performances: As a corrupt cop, the award-worthy Art Acuña is a sinister presence in Fajardo’s “Posas.” In “Ang Katiwala,” Dennis Trillo is fetching as a 32-year-old illiterate caretaker of a house once owned by former President Manuel L. Quezon. Kristoffer King and Kristoffer Martin also hold their own as brothers who work as betting managers in illegal “saklaan” at fake wakes, in “Oros.”