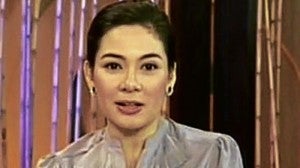 Now that Solar TV News has gotten the exclusive services of acclaimed news anchor and interviewer, Pia Hontiveros, for its nightly newscast, we hope that the weeknight program is only the first of a series of moves to show that Solar has what it takes to compete with the big boys—and girls—of TV news and public affairs.

For starters, Solar’s nightly news program has made a positive impression on viewers who want real news reports, instead of the melodramatic non-news coverage of insignificant crimes, accidents, altercations and gossip that are rife on some other channels’ newscasts.

In addition, Solar News should come up with incisive special reports and analyses that insightfully help viewers understand the significant events happening around them, and the impact those events have on their lives.

On “Walang Hanggan,” it’s great that the drama series is so popular that it’s being extended, but its creators should worry about the encroaching ennui and feeling of “been there, seen that” which, this early, some viewers are already complaining about. After all, if you’ve already settled some key plot and theme issues, why belabor them all over again?

The addition of the new villain and schemer played by Eula Valdez is expected to energize the series’ Book Two extension, but that has yet to really come about.

At the moment, however, we’re happy that the focus of the extended storytelling has shifted from the series’ callow, young leads to its mature stars, Dawn Zulueta and Richard Gomez. They have the thespic weight and sense of texture to make the show more than just a series of contentious encounters and complications—so, “Walang Hanggan” should take fuller advantage of their much-missed stellar combination.

Televiewers who like watching truly dramatic performances instead of merely melodramatic approximations thereof should keep an eye out for “Pintada,” which began telecasting on July 18 on ABS-CBN.

Last year, we lauded newcomer Martin del Rosario for his felt portrayal on “E-Boy” and wondered when he would be given an even bigger role on TV. Well, that’s finally coming to pass on “Pintada,” because Martin plays its young male lead, from start to finish.

He’s cast as a student who falls in love with his teacher (Denise Laurel), and they both have to struggle to vivify their love for each other, despite the many pressures on them to desist.

Since both Martin and Denise are sensitive actors, hope springs that the new series will end up as one of the year’s more dramatically instructive shows.