‘Bourne Legacy’ director on Filipino actors: An embarrassment of riches 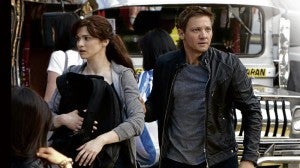 RACHEL Weisz and Jeremy Renner in Pasay, in a scene from “Bourne Legacy”

LOS ANGELES—In separate interviews recently, “The Bourne Legacy” director Tony Gilroy praised the pool of Filipino actors as “an embarrassment of riches,” while the film’s Oscar-nominated producer Frank Marshall described Palawan, one of the locations, as “the most beautiful place” he had ever been to.

At a packed press screening in LA last week, we finally got to watch “The Bourne Legacy,” a tight action-thriller whose climactic last part (about 40 minutes) is set in various places in the Philippines. Some of the locations include the Ninoy Aquino International Airport, Manila Yacht Club, the Metro Rail Transit station in Pasay, San Andres in Manila and Palawan province.

To avoid spoilers, let’s just say the original story written by Tony—inspired by the “Bourne” series created by Robert Ludlum—involves complications arising from CIA efforts to eliminate everyone involved in Outcome, a program developed by the US Department of Defense to create better spies and warriors.

This conflict takes Aaron Cross (Jeremy Renner), one of six agents being trained under Outcome, and Dr. Marta Shearing (Rachel Weisz), a research scientist with top-security clearance, to the Philippines, where a big pharmaceutical plant is located.

But for us, personally, the fun part was seeing the Filipino actors, all of whom did well. We have to clarify that these are small roles, most of them without speaking lines.

Among the Filipino actors we recognized were Lou Veloso (he plays a boat owner and captain) and Madeleine Nicolas (landlady of the house where Jeremy’s and Rachel’s characters seek refuge). “I know them well,” said Tony—who also wrote the previous “Bourne” movies—referring to Lou and Madeleine. “I wish we had more for both of them to do. I really do. We take a great deal of pride in casting great actors in small parts. In the Philippines, it was just an embarrassment of riches … You’re taking these stars and saying, ‘Will you come and do bit parts in our film?’ But for us, it was a big advantage because everybody was so talented. There’s a really rich talent pool there.”

Tony added that Lou was “really helpful” in finding the child actors. “He also brought in the kid to play his son. We were stunned. I don’t want to get anybody’s name wrong—I got too much going on in my mind now. The guy who plays Joseph at the factory gave an amazing performance. I remember we started rehearsing the scene to get blocked in.” (Later, we asked if the actor was John Arcilla; Tony said, “Yes, and he’s brilliant.” Tony related that Rachel was so impressed with John that she asked the filmmaker, “Who’s this guy?”) 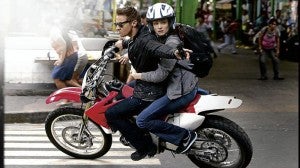 RENNER and Weisz on a motorbike defying Manila traffic

Frank—who earned five Oscar best picture nods as producer for such films as “The Curious Case of Benjamin Button,” “The Color Purple” and “Raiders of the Lost Ark”—announced a premiere in Manila on August  5. “Unfortunately, it’s the same time the movie opens here in the US, so all of us will be here. I think Pat Crowley (coproducer) is going to the Manila premiere. We’re going to send a little message from all of us.”

It seemed only like yesterday when Frank was telling us about preparing for the Manila shoot of “Bourne Legacy” last December. We asked how he, Tony and his colleagues decided to film the crucial scenes in the Philippines. “It’s about the story,” he began. “What we’ve done on all the movies is go to different locations that few have seen before. What Tony likes to do is, he takes a trip to three or four different places that might work. He did that early on with Pat Crowley, my cohort, my partner in crime and coproducer. They went to Bangkok, Saigon and Manila.”

Manila won, Frank said, because of several factors: “The ‘Bourne Legacy’ project was very story-driven and we found these locations in Manila. It was also beneficial for us on the production side that foreign movies have been made there. So there was an infrastructure that could support us. That’s how the decision was made. Then Tony wrote the script based on what he saw and found in the Philippines.”

Frank credited Tony on the scene where Jeremy and Rachel ride a motorcycle while being chased by LARX #3 (Louis Ozawa Changchien) and Metro Manila cops on Ramon Magsaysay Boulevard. It was quite a feat to make that scene look fast-paced and exciting, given how slow traffic really is in Manila.

“The traffic is almost like LA’s,” Frank said, laughing. “We were used to it.”

He revealed that it took about 10 weeks to shoot that particular scene which ends in a fish market. “We were in Manila six weeks as a first unit, and another four weeks as a second unit,” Frank recounted. “During that whole time, they were doing pieces of the motorcycle chase. Obviously, it was a big undertaking to close off all those streets and have all those people in the background. That’s all real. That’s just happening in the day so we took advantage of having people who were around Jeremy and Rachel. All are extras but they were going about what normal people do in those situations. We had 300 people helping us as production people and assistants who were controlling the traffic and everything.”

Working closely with veteran line producer Lope “Jun” V. Juban, Jr., Frank was grateful that no less than  President Aquino offered support. “The President was very helpful,” Frank said. “It was a good thing for us that he likes the ‘Bourne’ movies.”

Frank had left Manila when Jeremy went to Malacañang Palace to meet the President. “I still have the shirt [a barong], though,” Frank quipped.

The producer also credited Dan Bradley, stunt coordinator and second unit director. “This is his third movie,” Frank said. “I found him. He did a stunt in ‘Adaptation.’ If you remember the crash in ‘Adaptation,’ it was so real. We were looking for somebody who could create something that was as realistic because our movie is about realism. Dan was the guy.”

He gushed over the beauty of Palawan. “It was the most beautiful place I had ever been to,” he said. “It’s just staggeringly beautiful. Unfortunately, I was in Palawan for only two days. I wish we had spent six weeks there.” 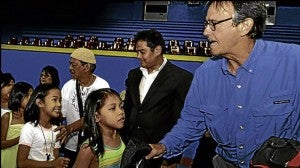 PRODUCER Pat Crowley (right), with actors John Arcilla (in suit) and Lou Veloso after the shoot, during a gift-giving event for the children of San Andres

Both Tony and Frank were glad to see Daniel Craig on the Manila set, when he came to visit his wife, Rachel.

“On the first night Daniel was there,” Tony recounted, “we were shooting late. I turned around from the monitor and he was back there with Jeremy. They were sitting and talking. I looked at them and I thought, My God, these are two badasses at the moment! How unusual that they have a certain look of toughness. It was really remarkable to see them together. I did not take a picture. I thought, I should take a picture, but decided I should just remember it.”

Frank concurred, saying: “It was pretty cool to have James Bond on the ‘Bourne’ set with Aaron Cross. We had a great time. It was really fun.”

Frank, whose early credits include being line producer for “The Last Waltz,” Martin Scorsese’s seminal documentary on The Band, confirmed that Jeremy has signed up for two more “Bourne” movies.

Asked when they will start planning the next one and what they have in mind, Frank replied: “We don’t know what it is yet because we’ve been so focused on this movie, being in what I call the tunnel for the last six months from which we’re coming out of the other side after Labor Day (Sept. 3). Then we’ll start talking about the next movie.”

Told that moviegoers would probably like to see Rachel’s character back in the next installment, Frank smiled and said, “Yeah, we set it up.”

Reminded that characters like Aaron Cross and Jason Bourne live such dangerous lives that they don’t make room for relationships, Frank countered: “I think, though, that maybe Jeremy’s character is what’s different about this movie. There is a human side to him. We see and recognize that.”