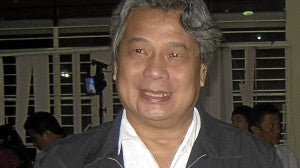 The entire Sampaguita Pictures collection was recently turned over to the NFAP, according Briccio Santos, FDCP chair. “Roughly 200 titles are now stored for safekeeping at the temperature-controlled facility,” Santos said.

These films were produced by the Sampaguita studios during the first Golden Age of Philippine cinema in the 1950s and 1960s.

Santos said that the film inventories of the National Historical Commission, the University of the Philippines Film Institute, plus the movies of director Mike de Leon, have been deposited in the archives.

Santos recalled that during a recent trip to Paris, he visited the French Film Archives to submit Estella’s Rizal movie, produced by Premiere Productions in 1956, for restoration.

“It’s painful to say that only a very small part of the Rizal film can be saved due to the advanced stage of deterioration,” Santos pointed out.

While in France last May, Santos and FDCP executive director Miguel de la Rosa met with their counterparts in the CNC (National Center for Cinema) and the INA (National Audiovisual Institute).

Santos discussed with the French experts how to further strengthen the cinematic ties of the two countries. The meetings were arranged by Christian Merer, counselor for Cooperation and Cultural Affairs, and Martin Macalintal, audiovisual attaché and cultural coordinator, of the French Embassy in Manila.

Like in the Zamboanga fest, Merer attended and actively participated in the Marawi edition of Sineng Pambansa. Merer felt it was important to visit Mindanao and encourage the budding filmmaking scene in the region, too.

Santos hoped to secure the support of French Ministry of Culture and other agencies in charge of the digitization of films.

This year, CNC officials will visit the country. “In November, a team of Filipino technicians will be sent to Paris to undergo specialized training on the latest methods and technologies in film restoration and preservation,” said Santos.

Apart from the Sampaguita collection, NFAP also plans to retrieve more films from the libraries of the Philippine Information Agency and the Movie Workers’ Welfare Foundation Inc. (Mowelfund).