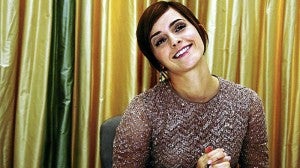 LONDON—Interviews with the main cast of “Harry Potter and the Deathly Hallows—Part 2,” the last movie in the series, inevitably turned into a look-back at the phenomenal ride they’ve had for the past 10 years and a look-ahead into the future.

Over the years of interviewing these kids in Leavesden Studios or at the Claridge’s Hotel (fittingly, these final chats were held here), we’ve virtually seen them grow into young adults. No one personified that transformation more than Emma Watson, who has metamorphosed into a lovely person inside and out.

On this afternoon where the sun, like a sorcerer, alternately brightened and darkened a hotel meeting room, Emma was a knockout in her short ’do and glittering Valentino dress. The actress who plays Hermione has always been smart, but it’s particularly gratifying to hear her talk.

There’s a warm, caring and thoughtful person behind that pretty face.

Said Emma of her young Hermione character, who appeared onscreen with an “enormous hair”: “I see that girl and I know that’s me, but I feel as if she’s another person. So much time has passed. It’s as if I almost don’t know her.”

RUPERT Grint (Ron Weasley), the eccentric among the cast, revealed he “stole the number on Harry’s house” as a souvenir.

Laughing, she admitted: “It’s mildly embarrassing to see the awkward stages of growing up. My hair was just enormous.”

She pointed out that she had to temporarily stop going to school because shuttling between Brown University and the UK to do the film was getting to be unproductive. So she decided to concentrate on filming first. Emma added that she’s on an advance level at Brown so she’s not left behind despite her academic hiatus.

We asked Emma about a scene toward the movie’s end when the central characters are shown 19 years later, sending off their kids to Hogwarts at the train station. Emma answered, “That was very emotional, especially when I realized that Ryan Turner, who plays Hugo, my youngest son, was the age that I was when I stood on the platform in the first movie. Seeing how excited, nervous and in awe the kids were took me right back to day one. So that was a really poignant scene to film. I also had to deal with what it might be like for me to age.”

TOM Felton, who plays Draco Malfoy, said he “doesn’t intend to shake off the bad guy roles” after “Harry Potter.”

Asked what she dislikes about herself these days, Emma proffered that she is impatient and “very self-critical.”

She has just finished filming “The Perks of Being a Wallflower,” an adaptation of a coming-of-age novel. “It was probably the best six weeks of my life,” she said.

“Yeah, ‘keep’ is better than saying ‘steal,’” Rupert Grint cracked when we asked him what prop he got to, well, keep from the “Harry Potter” movies. “I stole the number on Harry’s house,” replied the endearingly eccentric one in the cast.

Rupert revealed that while he has his own flat, he still lives with his family and miniature pets, adding that he enjoys being taken care of by his mom. He still occasionally drives his ice cream truck but since it’s summer here—“peak season” for the ice cream business—Rupert said that it’s a problem when he drives around and plays the truck music because people do come out and expect to buy ice cream. He doesn’t have ice cream in the back although on one of the last shooting days, he did serve it to the cast and crew from the truck.

Tom Felton smiled when asked if he knew that Emma had a crush on him when they were much younger. “I heard it through the grapevine,” said Tom, who is the opposite of his Slytherin leader role, Draco Malfoy. “Emma and I are very good friends.”

A smiling, genial young man, Tom maintained that he “doesn’t intend to shake off the bad guy roles.” He said he got to “keep” Draco’s silver ring “which was too big for my 13-year-old finger.”

MATTHEW Lewis (Neville Longbottom) admitted he got marriage proposals like others in the cast: “I turned them down.”

What was it like to work with Ralph Fiennes, who plays the evil Lord Voldemort to such perfection that the character is now considered one of the greatest villains in cinema? “Ralph in normal clothes is a lot less terrifying, for sure,” Tom answered. “But he’s still a very powerful figure, a real presence. He’s a scary guy. I learned a lot from him.”

Tom reflected what most in the cast admitted—that they’ve had moments when they felt, “I don’t want to do this anymore.” According to Tom, Daniel reminded him how “incredibly lucky” they were to be doing the “Harry Potter” films.

Ralph, tan and handsome in a gray suit, was in a good mood—often breaking into his impish grin. He recounted how kids visiting the set were scared of him. “Even though I wasn’t doing anything,” he quipped. For Ralph, the biggest villain was Amon Goeth, the concentration camp commandant he played in Steven Spielberg’s “Schindler’s List” because “he was a real, disturbing figure.”

The award-winning actor said that he has immense respect for Daniel Radcliffe, who literally and figuratively goes on an acting mano a mano with him, especially in this final film. “It’s a collaborative effort,” Ralph stressed.

David Yates, who successfully directed the last four “Harry Potter” movies, said that while he is grateful for the experience, he is yearning to make small movies again. “I want to make leaner, meaner movies,” he declared. “I want to get my edge back.”

Speaking in his trademark slow, gentle manner, David pointed out that Daniel has evolved from a shy kid into a more confident actor. He predicts that someday, Daniel will become a “fantastic director.” (We are scheduled to interview him on a later day.)

David proudly remarked that Emma has grown into a woman who is curious about the world.

The filmmaker confirmed that they indeed had to reshoot the final scene at the train station because they were not satisfied with the makeup used to make the actors look older. “Rupert looked 57, instead of 37,” David said.

Matthew Lewis, who essays Neville Longbottom, Harry’s faithful friend, said that he has heard the rumors that his character will figure prominently in a spin-off novel that J.K. Rowling is planning. He said that if the rumors are true, he hopes that the stories will be set somewhere else in the world.

As one of the actors who grew up right before our eyes, Matthew recounted that one time during a filming break, he lost a lot of weight. He was nervous that the character would be recast. Instead, he was asked to wear a fat suit but was made to get rid of it in “Part 2.”

Like many in the cast, Matthew got marriage proposals. “I turned them down,” he said with a wry smile.

He distinctly remembers the last day of filming. They shot in the courtyard, “with bodies lying everywhere,” after one of the film’s battles. “That’s a wrap!” came the announcement and then everyone broke into applause. The cast and crew started dispersing until it was just Emma, Tom, David and himself on the set. “We looked at each other like, ‘That’s it?’”