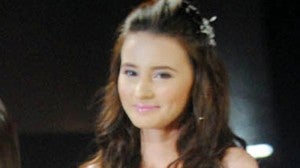 Time was when GMA 7 soap star Jackie Rice’s life was in limbo. “I was jobless for two years,” she recalls, without rancor.

She concedes that she can’t blame her bosses for putting her career in the deep freezer. Once dubbed pasaway (incorrigible), she was suspended several times due to her unprofessional attitude which was widely reported.

She was young, she explains, only 16. And restless. To make matters worse, she fell in love.

“I didn’t consider acting as a job at the time,” she says. “I didn’t take it seriously.” She would rather party and bar-hop all night.

Soon enough she was tired of the club scene as well. “I got bored, just like that,” she recalls. “Every night, you see the same people.”

Looking back, she sees that it was a waste of time. “I gave up precious sleep—and for what? I didn’t get anything in return,” she adds.

On the bright side, having experienced such a loss, she now knows how to make her time at work productive.

These days, the afternoon soap opera “Kasalanan Bang Ibigin Ka?” keeps her on her toes.

She doesn’t mind the long hours on the set. On the day of a cover pictorial for FHM magazine, she had taping until 6 a.m. “My call time for the shoot was 9 a.m. I had only three hours of sleep!” she recalls.

She’s not complaining. “I’m thankful; it’s good to be always busy,” she points out.

After all, being in show biz allowed her to invest in a real estate property at a young age. Notes Jackie, now 22: “The house was my priority; I really saved up for it. I had little interest in designer bags and shoes.”

A flourishing career inspired her to get in shape as well. “I used to be chubby,” she recounts. “Now, I am into boxing, Zumba and swimming.”

She swears she’s neither bulimic nor anorexic, as malicious talk would have it. “I’m not afraid to eat carbs! I usually have rice for breakfast and lunch. I’m confident of burning all the calories during all-night tapings.”

Thanks to her timely transformation, even her personal life is doing well.

She’s been involved for the past three yeas with the same nonshow biz guy who shows his affection in very practical ways. “He’s very supportive,” says Jackie. “He votes for me in the FHM [sexiest Filipinas] poll.”

She made it to No. 7 on the latest list.

And now that her career is on an upswing, Jackie says she misses former screen partner and fellow (reality talent search) “StarStruck” winner Marky Cielo the most. Marky passed away in 2008.

“I regret that he wasn’t able to see me doing well,” Jackie says. “When I was jobless, he pushed me on, saying I shouldn’t give up on my dreams. He never stopped encouraging me, and cheered me up whenever I was down.”

As a friend, she describes Marky as “one of a kind.”

She adds: “He was talented. He could sing, dance and act—everyone noticed—but still he remained humble.”

If only he could see her now, Jackie says wistfully: “I’m sure I’d make him very proud.”