Requiem for a radio drama queen 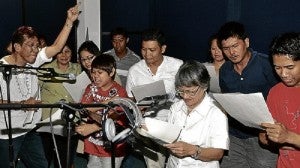 THE DRAMA queen (third from right) and her troupe of voice talents in one of their ensemble performances. RICHARD REYES

On the day comedy king Dolphy was laid to rest, a queen who reigned in another realm of the entertainment world also signed off.

For friends, colleagues, and family members, veteran radio voice artist Eloisa Cruz Canlas will always be remembered as a tireless woman who exuded passion in all of the characters she portrayed in a career that spanned more than half a century.

Canlas had starred from AM radio soaps since the 1960s to today’s TV animes, before she met an accident last year and an illness further slowed her down. She passed away on July 15 at age 66.

On the last night of her wake on Tuesday at Holy Trinity Memorial Chapels in Parañaque City, tributes poured out for “Lola Sela,” who succumbed to an illness she contracted after being hit by a car on her way to a TV station in Quezon City on Nov. 3, 2011.

Contemporaries, mainly from dzRH and other voice actors and actresses she had mentored, expressed their condolences to her family (and lent some levity to an otherwise somber night of eulogies) by doing what they do best: Sounding like other people.

On a more serious note, other colleagues remembered Canlas for portraying memorable characters that had entertained generations, from heroic princes (yes, she played even male roles) and flirty teenagers to suffering mothers and wicked witches. Sometimes she also pitched in as a dog or a rooster.

Rashida Elba Abanco, who started voicing radio dramas together with Canlas in the 1970s, said her best friend was a selfless workaholic who gave her all to those who sought her help.

“I remember sometime in the ‘80s when I had settled down with my family in Zamboanga, our house was razed by a fire. Jobless, broke and with nowhere to go, I went back to Manila and asked the help of Lola Sela. She did not hesitate and even allowed me to join her shows so I can have some income,” she said.

“She always seemed to be the first to report to work at the radio station before it even opened in the morning and the last one out at the end of the day. She would say yes to a lot of projects, and even though she already had her hands full she never complained about it and only became more passionate about her work,” she said. 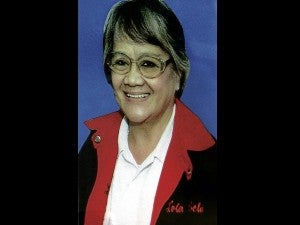 For Canlas’s apprentices like Marichu and Rosanna Villegas, she was a kind yet meticulous teacher who taught them the nuances of the craft.

“She really taught us the rigors of voice acting, how to best project voices of, say a young boy (you have to pucker your lips while speaking in a low voice), how to breathe properly, and many, many others,” Marichu said.

“She would never give up on you, especially if she really saw your potential. If you say ‘I can’t do it,’ she would say, ‘no, you can learn to do it.’ And she also used to tell us: ‘You’re here because you are great. But you need guts of steel and a heart of stone in this industry.’”

As for Rosanna, a radio voice artist who is also a dubbing talent for television shows and movies, Lola Sela’s generosity extends to her seemingly bottomless supply of food.

“She never ran out of it. And she really liked it when you cuddle up with her in between radio drama (taping) sessions and ask her for a treat. She’ll buy whatever food was available nearby; she never hesitated,” Rosanna said.

“Lola Sela is one of the greats of the radio industry. Her passing marks the end of an era. She is simply irreplaceable,” she added.

Canlas’s youngest of three sons, Edward, 31, described his mother as a loving parent who always had time for the family despite her hectic schedule.

“She might be a workaholic, but she always had time for us, and we often watched movies or ate together at home as a way of bonding,” he said in his eulogy.

Edward said she was the kind of parent who liked a hug and often asked him if he loved her. “In return, I would give her a massage. I would really miss that from her,” he said.

And addressing his mother, Edward said: “Mom, thank you for all the wisdom you’ve imparted to us, which now defines who I am and who we are. We are proud of you.”

Lola Sela began her voice-acting career on campus radio as a hobby and later turned her exceptional talent into a career on dzRH radio and Manila Broadcasting Corp. for more than five decades.

She pioneered in radio operas in the 1970s that endorsed soap products. In 2010, she starred in and produced drama serials on Radyo Inquirer 990 AM.

Earlier last year, she was conferred the University of the Philippines Gawad Plaridel Award for her unique abilities and contribution to the broadcast industry.

Canlas’s remains were cremated on Wednesday.