Anne Hathaway on her iconic Catwoman and Fantine roles 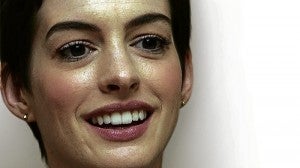 LOS ANGELES – 2012 is shaping up to be such a big year for Anne Hathaway that she said she has not even really made big plans for her wedding next year. In addition to playing the iconic Catwoman in Christopher Nolan’s “The Dark Knight Rises,” Anne is also generating excitement over her portrayal of another popular figure, Fantine, in Tom Hooper’s adaptation of the hit stage musical, “Les Miserables.”

Still wearing her short haircut for “Les Miz,” and looking radiant and younger-looking (she turns 30 in November), Anne was visibly jazzed up as she talked about her two major roles this year.

In an unusual move, Hooper decided that the cast should sing live on-set, not lip-synch to prerecorded tracks.

“Hugh is going to blow people’s minds in the movie,” Anne predicted. “There’s something so deep and almost spiritual about his performance. I’ve never seen anything like it.”

“Russell also blew my mind,” said the actress, pixie-ish in her short do and little black dress. “I’ve never seen an actor work as hard as he did to become Javert and to increase his vocal range. When Russell sang ‘Stars’ to me, I cried. It was so full of emotion and nuance, and his voice was so strong! It was like heaven every day to be with two beautiful men with such goodness inside of them.”

Laughing, she quipped, “It made me want to make all my projects musicals.”

Anne choked a bit as she answered our question on her experience singing “I Dreamed A Dream,” the musical’s haunting anthem. “The way we approached ‘I Dreamed A Dream’ is very different than it is on the show,” she began. “We put it at a different spot in the movie. In the show, it happens after she loses her job at the factory. In our version, it’s after her first experience as a prostitute, so I was really in a raw place when I did it. It was painful.”

Anne pointed out, “My version is very different. I performed it first for Alain Boublil and Claude-Michel Schonberg.” Anne said that once she got the composers’ approval, she gained some confidence, but she was still daunted when it was time to shoot the scene.

She recalled, “On the first take, I definitely felt the weight of the song’s fame and its iconic nature. Tom Hooper came up to me. I said, ‘I’m scared, Tom.’ He said, ‘It’s not an iconic song. This is a woman’s soul that you are expressing. Just focus on that.’ I did, and the next take was the one he went with.”

In a serendipitous twist, Anne first heard “I Dreamed” as a young girl when her mother, Kate McCauley, sang it as Fantine in the first US national tour of “Les Miz.”

“I don’t know if I was born to play the role, but I definitely had a leg up,” Anne said with a smile. “The first time I saw ‘Les Miz’ was with my mom in it, playing the part that I wound up playing, too. So, to say that I carry this music inside of me is an understatement.”

Looking ahead, she said, “I think the next 10 years will be about trying to find challenges within my career, making sure that my life remains fulfilling. I’m getting married, so it will be really exciting.” Anne’s fiancé is Adam Shulman, an actor and jewelry designer. He designed the ring he gave her when they were engaged late last year.

The wedding has been set for next year. “Not this year,” Anne confirmed. “This year’s too big. We want to have a little more time to plan.”

She expressed gratitude for the challenging roles that landed on her lap. After getting an Oscar Best Actress nod for her performance in “Rachel Getting Married,” Anne said she almost could not believe the next breaks that came her way. “Here comes along Chris Nolan, with an offer that was so enticing and seemingly impossible,” she enthused about her Catwoman role. “Then, there’s ‘Les Miz,’ and I had to sing live for 12 hours a day. You never know when you’re going to be challenged next. I’m looking forward to scaring myself more.”

“‘Dark Knight’ was a big challenge,” she stressed. “‘Les Miz’ was a huge challenge. I feel that I did grow as a result of them. I’ve never been happier. To say that while you’re turning 30 is a cool thing.”

Anne lost weight for “Les Miz,” but she stressed, there was no pressure for her to drop pounds for “Dark Knight.” “I didn’t have to lose weight for the cat suit,” she declared.

She volunteered, “What I was told was I needed to be strong enough to do all my own fighting. The attitude was to let me spend a few months getting strong, and whatever the result was, physically, that was going to be what Catwoman was going to look like.”

“For ‘Les Miz,’ since I play a tubercular, impoverished prostitute, my weight-loss regimen was to make me look incredibly sick and near death. I lost 25 pounds. It was very hard.”

In addition to hoping that her dream to play Judy Garland in a biopic comes true, Anne wants to have kids: “I hope to be a mother,” she enthused. “The next few years will be about trying to continue finding the balance between having a happy home life and a fulfilling career!”